Moreover, it appears that both girls and boys feel that the responsibility to set boundaries in physical contact is restricted to the girls. In short, young people frequently come across unequal roles for girls and boys when it comes to sexuality. These roles leave little space for sexual diversity.

But for every girl sexuality means something else. Most of the girls already know a lot about sex. They have heard about it from their parents, on the streets, seen it on television. But how will they learn to derive pleasure from their sexuality? The focus of sexual education is usually more on the warning-side (don’t become a slut and make sure you don’t become pregnant) than on the possibility of enjoying sex.

What about lesbian girls?

Many parents pass on their own ambivalent – or even negative – attitude with respect to homosexuality to their children. For girls who are still questioning their sexual orientation, this can be an obstacle, they might think they are not allowed to be attracted to women and don’t feel the space to explore their sexual identity. Like other girls they probably haven’t learned that it is okay to enjoy their body and to enjoy sex. They discover their being ‘different’ on a certain age.

Coming out is not always easy. They even might meet violent behavior. Being straight is the standard, even walking hand in hand with your girl-friend can evoke aggression.

Meanwhile they are trying to discover what lesbian sexuality means to them. They must learn be their gay-selves in a straight environment. And of course go out on dates, meet a girl-friend and learn to enjoy!

Recent surveys show that religion also plays an important role in the way girls handle sexuality. Christian, Islamic and Hindu young people for whom faith plays a role, are more cautious in experimenting with sex and love. They are also more aware of the rules of life which can apply to them, such as virginity. And more often, they’ll wait with sex till after the marriage. 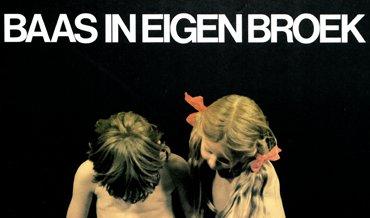 Advertisement of the NVSH, to stimulate kids to think about seksuality.

Sex tips. Nowadays, the Internet is full of them.. Yet it is only recently that total ignorance concerning sexuality was considered the ideal education for children. Sex was linked to marriage and reproduction. In sex ‘manuals’ this view changed slowly after 1945 in the Netherlands.

With the sexual revolution many taboos disappeared. But did it actually bring freedom? The last few years, a considerable number of prominent women complained about the pornification of our society with its abundance of sex in advertising and media. The woman reduced to sex object seemed to be the epitome of emancipation. Did the commerce bolted off with women’s sexuality? Was the emancipatory message of feminism hijacked?

At school, most of the young people will get education on sexuality and relationships; contraceptives, sexually transmitted diseases and reproduction are much discussed topics. Other topics, such as homosexuality, identifying needs and limits, virginity, and sex in the media often remain underexposed.

Can sex also be fun?

If girls want to know more about sex they often consult their mother. But the emphasis in most sex education lies in how girls should behave, on the dangers of sex and on prevention of getting pregnant. Girls are not taught how to enjoy sex. Their mothers probably also didn’t learn this, or learned it later in life.
The message ought to be that sex is also fun. Girls shouldn’t be informed only about the dangers of sex, but also about how they can identify their own needs and limits.

The children came from the white cabbage. Once upon a time, a beautiful large white cabbage grew in the garden. I thought that it would certainly contain a baby. I was an only child and badly wished for a little brother. My disappointment was huge when one day the cabbage was gone. You weren’t allowed to see anything. Even if the cat had to get babies, you were kept away from her.

“Girls are magic. They can get wet without water, bleed without injury, and make boneless things hard”

Sexual diversity is about conventions. It is precisely for this reason that attention for this matter at school is so important. Anyone deviating from the conventional is but too often harassed. Boys are at risk to be scolded for ‘gay’if they happen to appear feminine or don’t act tough. Children who don’t meet the standard can feel pretty unsafe. Justly, the government feels this should change. For this reason the core objectives for education have been adapted in The Netherlands in 2012. Sexuality and sexual diversity have explicitly been incorporated in the core objectives for primary education, secondary education and special education.

In the media, young people are frequently confronted with a stereotype view on male and female sexuality. Girls are perceived as odd if they want sex and boys if they refuse sex. And girls are not supposed to date with other girls or boys with boys. Media often give the impression that sex is about male aggression and female submission. Girls see in the media how they must satisfy the ‘requirements’ of boys, but there’s little room for a realistic own perception of sex. In addition, they find it difficult to say no. They see a lot of naked women, but few naked men.

In 2013, the brand Abercrombie and Fitch started a campaign in which young men with bare muscular torso walk around as hosts in their shops. Young male nude as a means of sale for a mixed young public. Will boys now also be exposed to almost unfeasible demands? Or does this contribute to a general idiom of perfectly functionally nudity as a means of sale, an idealized image that does not apply to boys or girls in general?

Glossy illustrated magazines and profile sites are shown to have a negative impact on the self-image of lowly educated girls. By watching music channels, however, these girls develop a more positive image of their own appearance. Only when girls find medium images very realistic, music channels prove to be influential on the degree in which they have sexual experience. It is therefore important that educators make sure that children are acquainted with the media at a very early age by discussing representation on television, internet, radio and in magazines. Not by setting limits and criticizing, but entering into a dialogue on media images appears to be the most positive. Highly educated girls experience less influence of the media on their body image.

For a long time, I thought I was the only one with pubic hair. I really thought I was some kind of monster and I didn’t really know how to handle thing if I ever wanted to get married. The solution I thought of was that my husband would never get to see me naked. I stayed with that idea, until I saw a picture of a woman who also had hair on that spot. I did not dare ask somebody, not even my girlfriends. The name alone: pubic hair! As if it is something to be ashamed of.

The ‘groeigids’ (guide about children’s development) 2011 from the Amsterdam Health Service GGD states the following:
Nowadays, it is very common for young people (men and women) to shave their entire body, including the pubic area. Many young people consider hair as distasteful. In reality it has do nothing with hygiene, it is simply a trend.

This is from a booklet that all children in group 7 (primary school) recieve. To what extent will this contribute to social pressure? Are you still allowed to have hair? Which freedom is there left for individual decisions?

Girls in the Netherlands are also confronted with sexual violence, honor-related violence, domestic violence, maltreatment and can become victim of prostitution. There are many organizations that deal with girls who are victims of violence. The organizations mentioned below are some examples and are also capable of referring to other suitable organizations.

Fier offers guidance and treatment to children, young people and adults who are traumatized by, among other things, sexual abuse, maltreatment, honor-related violence or other traumatic events.