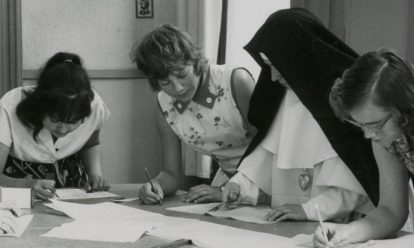 Interviews with five Dutch women. As young girls they had to work in sewing ateliers, laundries and ironing rooms of the De Goede Herder. For years, they worked without payment under miserable circumstances.

In several other countries, laundries and other institutions run by the Sisters of the Good Shepherd forced young girls to do work. With a lot of punishment and  mistreatment. Among them is the Magdalene Laundries in Ireland

Until now, we know little about the forced labour in the residential youth Services of the catholic church in The Netherlands. It is estimated that 15,000 Dutch girls worked unpaid during their detention at the branches of the Roman Catholic Congregation De Goede Herder, in  Zoeterwoude, Velp, Tilburg and Almelo. For this Oral History project historian Dineke Stam and documentary maker Jet Homoet interviewed five of them.

The short films Everything was locked down were launched on January 24, 2020. To make research possible, Atria stores the long interviews for permanent access of this digital data via DANS-KNAW. Available from March 2020.

“These interviews fill a harrowing gap in the Dutch history of forced labour within the walls of Roman Catholic youth Services. Here, educators and governmental youth Services acted as suppliers for unpayd work and helped the congregation to generate income.“