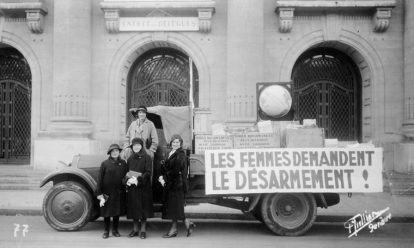 In May 2003, archival materials that had been stolen from the International Archive for the Women’s Movement (IAV) in July 1940, were returned. The stolen material included the personal archive of Rosa Manus (1881-1943), one of the founders of the IAV in 1935 and a very active and internationally-oriented feminist and pacifist.

Rosa Manus came from a well-off liberal Jewish family . In 1933 she became president of the Neutral Women Committee for Refugees, this committee helped refugees from Germany. She was aware of the threat of Nazi Germany for her as a Jewish woman. In 1940, shortly before the invasion of Germany in the Netherlands, Rosa Manus brought her own archive to the IAV. She hoped that it would be safer there than at her home. That turned out not to be so, a few months later, the IAV was closed by the Nazis and completely emptied.

Rosa Manus led an activist’s life. Just one of her many projects is illustrated in this historical material with a number of wonderful and interesting items found in her archives. The documents deal with Rosa Manus’ work as secretary of the Peace and Disarmament Committee of the Women’s International Organisations, also known as the Dingman Committee (after chairwoman Mary Dingman).

5 September 1931
The committee Peace and Disarmament Committee was organized in preparation for the major disarmament conference that was to be held in Geneva in February 1932. Initially, there were 13 organizations involved but later on 15 organizations took part in the action.

One of Rosa Manus’ tasks was to prepare a petition articulating ‘women’s desire for peace’ which was to be presented as a declaration of women’s support to the disarmament conference.

6 February 1932
Thanks to Rosa Manus’s extraordinary organizational talents and energy, more than 9 million signatures from 59 countries were collected on the petition. Her archive contains tallies of signatures by country, correspondence with the committees from different countries, photographs documenting the transportation and official presentation of the mountains of signatures on 6 February 1932, and extensive reports about the event.

‘Of course, it is very exciting to receive the packages, and even if only few countries managed to collect a small number of signatures, I am satisfied. … I hope that we will gather 10 million signatures!’

5 February 1932
The signed petitions were driven through Geneva in two lorries decorated with a globe, posters and banners.. The signatures were bound in small packages with green ribbons and labels – the colour of hope. The labels bore the names of the countries where the signatures came from.

Arriving at the steps of the building where the conference was being held, the women were handed the parcels with signatures to carry inside. (Collection IAV-Atria)

Rosa Manus and her “pacifist tendencies”

On August 16, 1941 Rosa Manus was arrested because of her “pacifist and international tendencies . First she went to the prison in Scheveningen, later she was transported and eventually taken to the Ravensbrück concentration camp . She was probably gassed in March 1942.