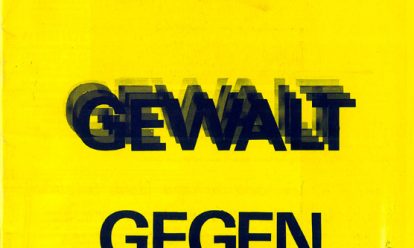 Summary:
The text begins with an analysis of the situation of lesbians in the heterosexual patriarchal society. A lesbian is defined as a woman “who works, lives, and loves independently. As such, she is a monster.” Being a woman is assigned by men. The text describes the everyday difficulties of lesbian life and different methods of hiding or deceiving. With the sentence, “We don’t want to be good lesbians anymore!” the author segues to a direct confrontation with the Women’s Movement. Lesbians in the Women’s Movement are no longer willing to hide and only be defined by their sexuality, but rather by the fact that they invest their energy in women instead of men. Lesbians are women-identified women who use their newly acquired strength for themselves and the Women’s Movement. They want the Women’s Movement to deal with them, “We are part of you”. The specific demand that lesbians bring to the Women’s Movement is the abolition of forced heterosexuality and gender role clichés.

Some hypotheses as for why and how lesbianism is denied in the patriarchal system and how this affects, not only lesbian, but all women.

A detailed, illustrated description of the way a pregnant women can provoke an abortion herself with some penicillin tablets, a speculum and a catheter.