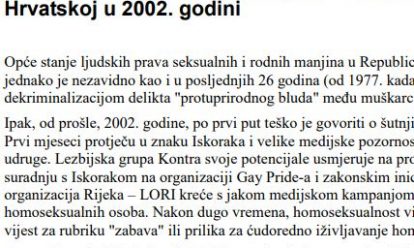 Summary:
This is the first report on the state of human rights of sexual and gender minorities in Republic Croatia in year 2002, prepared by two activist groups, Kontra and Iskorak. It consists of the description of the situation, including documented cases of inappropriate language and discrimination of LGBT persons in the media, discrimination in military, physical and verbal violence,
lack of sanction for violence occurring during the Gay Pride, and public expression of homophobia. Positive changes are reported in some laws, in media, civil society and in cases of cooperation with the police. Demands include law on antidiscrimination.
The report is directed to Croatian government, parliamentary commission for human rights, Croatian president, Council of Europe, OSCE and UNHCHR.

The photo documents a protest/political statement of the feminist activist group Dolle Mina who interrupted a meeting of gynaecologists by bearing their bellies on which the slogan ‘Boss of own belly’ was written.

First public mention of sexuality in relation to feminist activism.