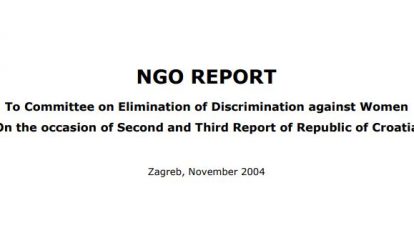 Summary:
The report follows the structure of the CEDAW, omitting some articles, and extensively documents problems related to legal protection against discrimination, implementation of gender mainstreaming, elimination of discrimination in media, education, political and public life, labor, health and family. The implementation of existing laws and policies is seen as the most
problematic, with lack of political will singled out as the major obstacle. Authors of chapters are twelve women’s NGOs and groups, while the report as a whole is edited by women’s human rights group B.a.B.e. The report is submitted for the 32nd CEDAW session held in January 2005.

Guidance for eventual and actual victims of violence within the family.

Autonomy is the constant movement of the shared rule-setting of living together and a draft of new boundaries reflecting on the context of women’s movements.