Dolle Mina was a Dutch left-wing radical feminist activist group, established in December 1969. Their aim was to improve women’s rights through playful and humorous protest demonstrations.

In September 1969, Dolle Mina started with a handful women and men, who shared a discontent about women’s rights and possibilities in both their private lives and in society. Despite the formal rights women had in 1970, there was still a lot of injustice and discrimination. Dolle Mina consisted of members of the Socialistic Youth group ‘Socialistische Jeugd’ who wanted a new women’s movement. They were inspired by campaigning women in the United States and by the Maagdenhuisbezetting (a major university sit-in) in Amsterdam.

Where did the name come from?

What was Dolle Mina’s objective?

In April 1970, at their first congress, Dolle Mina managed to settle on a statement everyone could agree with (not without difficulty):

“Assuming the role divisions between men and women are not defendable on grounds of biological difference, Dolle Mina aims to change society so it will offer equal opportunities for everyone, regardless of gender. This can be accomplished through social struggle, awareness and a change in mentality, resulting in a termination of socio-economical subordination of both men and women”.

How did Dolle Mina operate?

Dolle Mina was able to attract the attention of both politicians and media. Their first action, on 23 January 1970, was the storming of Nijenrode Castle, a private Business University that was only open for men at the time. This action was followed by the burning of a ladies corset at Wilhelmina Drucker’s statue. A few days later they blocked public urinals with pink ribbons to protest against the absence of public toilets for women.
Within a few weeks, Dolle Mina had thousands of followers. The new action group took Amsterdam like a storm, and very quickly after that took the whole of the Netherlands and Belgium. Right from the start, working groups were formed. The majority of these groups focused on practical matters such as abortion, day care centres, equal payment for equal work, and single mothers. But there was also a theory group focusing on education.

What did Dolle Mina want to achieve?

What did they achieve? 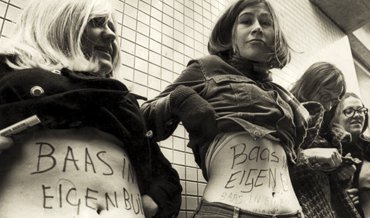 Dolle Mina’s demonstrating for the right on familyplanning and abortion, 1970 Utrecht © Spaarnestad

Around 1975, the Dolle Minas were only gathering in large numbers for huge abortion demonstrations. Dolle Mina became an integral part of numerous action groups and organizations: counselling groups, women’s courses, women’s houses.
Women started to participate in political parties and unions. Universities started to introduce Women’s studies. An Ombudswoman foundation, women’s help lines and safe houses were established. The possibility for children to stay at school outside hours was increased and education about contraception and abortion clinics was improved.

Dolle Mina is still well-known by a large public as a symbol of post-war feminism. It is engraved in the collective memory as a group of young girls with guts, demanding change by playful campaigning. Its objectives are still topical.

Goals that have been achieved such as equal pay and opportunity for men and women, better child care, sexual freedom and a revision of roles between men en women are on-going subjects of social debate.

Atria has the archive of Dolle Mina in her collection. Also a digital collection of individual histories of women from the so-called second feminist wave. The histories were recorded according to the oral history method. Atria also captured the biographies of several of Dolle Mina’s leading figures.

‘Mad Mina’ has become the symbol for the second feminist wave in the Netherlands. Four videos about the Dolle Mina’s and their actions.