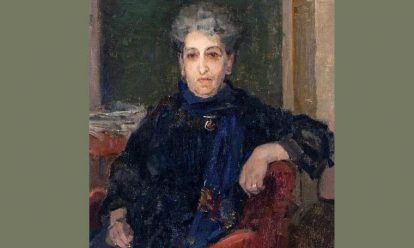 On Friday 1 November 2013, Atria received a letter from Aletta Jacobs. The letter dates as far back as 1903, was sent from Vienna to her nephew Charles Jacobs, and consists of two parts, folded together in one envelope. In this letter she describes, similarly as in her travel letters from Africa and Asia, her experiences with and observations of the population and politics.

She writes about Czechoslovakia and how its social democracy and women’s movement are still in their infancies. She also mentions how the son of the Chairwoman of Austria’s Women’s council, has strong feminist believes: ‘He has high expectations of the future influence of women’.

The letter of Aletta Jacobs

Approximately between 1920 and 1960, the letter was taken home by Gerrit van Roon, employee of the Koninklijke Papierfabriek Van Gelder & Zonen (Royal Paper factory Van Gelder & Sons) in Velsen-Noord, a small town. He always cherished the letter and kept it safe because he admired her views. Currently, his son is the owner of the letter. Although he is very much attached to it, the family thought it was time to make it available for a wider public. Great-grand daughter Esmée Heil thought Atria was the right archive for this letter. The original letter is now available in Atria’s collection and added to Aletta Jacob’s archive

Besides the letter, there has been another exciting discovery regarding Aletta Jacobs. Marten van Harten (historian and project advisor at INMP) found some moving images while working on the project “Discover peace in Europe’. The film (made in 1915) shows Aletta Jacobs and two other influential women, Jane Adams and Gertrud Baumer, walking in front of the Brandenburger Tor in Berlin. The women were there to study the consequences of food blockades.