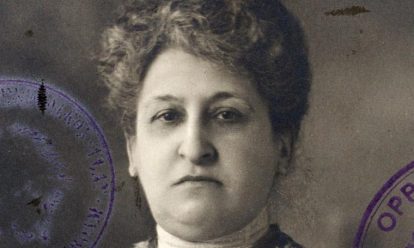 On May 6th 1915, she received a visa enabling her to travel through Germany and what then was called Austria-Hungary.

In May of 2003 this document was among the thousands of the supposedly lost documents that were returned to the IAV from Moscow, where it had been since 1945.

Aletta Jacobs wrote the following in her travel journal:

‘On Wednesday, May 19th, Miss Jane Addams and Dr. Alice Hamilton from Chicago, Mrs Van Sulfften Palthe from The Hague and me, left for Berlin. (…). The German women we met were very unpleasant because of the way they expressed their feelings of national pride, their complete lack of sympathy with the nations involved in the war and their strong desire to continue the war until German gained victory.’

Lizzy van Dorp (1872-1945) received this particular notebook for her 72nd birthday in 1944. It served as a gift from other women in camp Tjihapit II in Bandoeng on West-Java. It is a collection of recipes from the Indonesian kitchen to which they added their own recipes. Lizzy van Dorp meticulously made diary notes of her last period in […]

The term ‘women’s aid’ may have been invented in the 1970s, but many years earlier individual women and women’s organizations had already been active in this area. An initiative in this field from the beginning of the twentieth century, is the Vereniging Zusterhulp (Association Sister’s Aid). The founders, J. van Riemsdijk-van der Leeuw and H.W. Spiering, aimed […]