Since October 2017 the archive of Netherlands’ most prominent feminist Aletta Jacobs (1854 – 1929) has been recognized the status of UNESCO-heritage and has been included in the UNESCO Memory of the World International Register. The archive consists of images, objects and documents depicting both the Dutch and international struggle for women’s rights. It is stored at Atria. Through the Memory of the World Register, UNESCO stimulates the preservation of, and access to, authentic, unique and irreplaceable documentary heritage from all over the world. By having been included in the Memory of the World Register, the archive receives the protected status and acknowledgement it deserves. 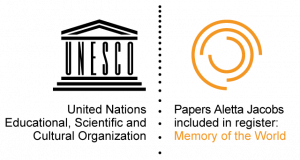 UNESCO Memory of the World

The suffrage struggle is most prominently represented in the archives, such as letters directed to Aletta Jacobs from, among others, international feminists like Carrie Chapman Catt, Anna Howard Shaw, Emmeline Pankhurst and Olive Schreiner. Another interesting subject is the Peace Mission in 1915: correspondence, travel documents and statements about visits to governments in Europe and United States. Other documents and objects from the archive depict the struggle to access higher education and the medical field, prostitutes’ rights, reproductive rights and the role of women in the political peace movements. Aletta Jacobs Papers are digitalised and accessible all over the world

In 1940, the International Archives for the Women’s Movement (founded in 1935 as the predecessor of Atria) was shut down by the German occupants and its contents were taken. Luckily, the board of the IAV had stored a number of documents in a safe, among which papers of Aletta Jacobs. In 1992, a Dutch researcher stumbled upon the stolen IAV-material in Moscow. Apparently, the Red Army took the documents to Moscow. The archives returned to Atria in 2003, among which some additional documents of Aletta Jacobs: a dozen letters, several of her articles, the English manuscript of her Herinneringen (Memories), an album of her travels to Budapest in 1906 and a travel document from 1915.

Through the Memory of the World Register, UNESCO stimulates the preservation of, and access to, authentic, unique and irreplaceable documentary heritage from all over the world. Atria submitted the nomination for the archive of Aletta Jacobs with support from the University of Groningen and the Sophia Smith Collection from the USA.