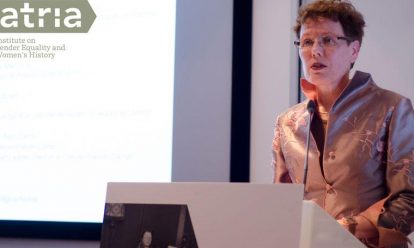 On Wednesday December 14 Professor Francisca de Haan gave the first Rosa Manus lecture called Rosa Manus: Restoring to History a “Dutch Woman Leader” who Fell Victim to the Nazi’s. There was also a comment by Professor Mineke Bosch. Text of the lecture (pdf)

Francisca de Haan is Professor of Gender Studies and History at the Central European University in Budapest. She has published for many years on the international women’s movement. Recently she and Myriam Everard jointly compiled a book on Rosa Manus: Rosa Manus (1881-1942): The International Life and Legacy of a Jewish Dutch Feminist (Brill, 2017).

Mineke Bosch is Professor of Modern History at the University of Groningen. Her publications include a biography of Aletta Jacobs: Een onwrikbaar geloof in rechtvaardigheid: Aletta Jacobs 1854-1929, (2005).

The Rosa Manus Lecture is a tribute to a woman who is of historical importance for the development of women’s position as fully-fledged political citizens and also in the field of history. Rosa Manus (1881–1942) played a crucial role in the women’s suffrage movement and the peace movement at both a national and international level. Through this annual lecture, Atria wishes to provide a critical, internationally oriented focus on academic developments that are relevant to women’s and gender history. It is therefore also perpetuating the memory of Rosa Manus and the historical significance of her work.

The Rosa Manus lecture is made possible by Soroptimist International Club (Amsterdam).

Who was Rosa Manus?

Rosa Manus (1881-1942) was an internationally oriented feminist and activist. In 1935, she co-founded the International Archives for the Women’s Movement.