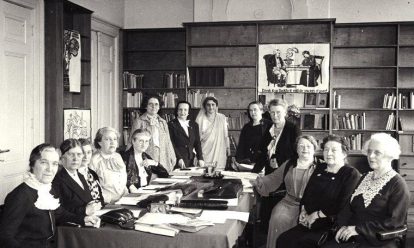 Rosa Manus (1881-1942) was one of the founders of the International Archives for the Women’s Movement (IAV) in 1935. However, since 1994 it has become evident that Manus had already been busy with setting up such an archive from as early as 1930. In 1994, the IAV received microfilms from Moscow. These microfilms appeared to be part of archives that were retrieved a couple of years earlier and had been robbed by the Germans in 1940. A major part of that robbed material originated from Rosa Manus.

One of the pieces was a carbon copy of a letter dated 1930 in which she writes about her plans for a ‘real feministic library’. That happened officially on the 3rd of December 1935 when the IAV was founded. Even before the official opening on December 19th 1936, the governing board of the International Alliance of Women for Suffrage and Equal Citizenship had a meeting there. Rosa Manus – third right in the picture – was vice-president of the IAWSEC and president of the IAV.