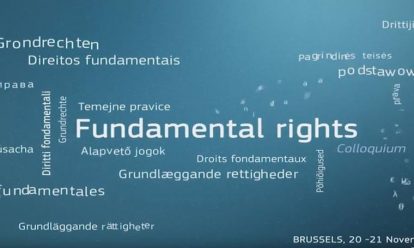 The #MeToo discussion, which has dominated public debate worldwide over the past weeks, has also penetrated the EU bubble. So much so that Vice-President Frans Timmermans – who himself told the NRC newspaper in 2002 that he had been abused as a teenager by an American priest – felt the time was right to choose “Women’s Rights in Turbulent Times” as the topical theme for the European Commission’s annual Fundamental Rights Colloquium, that took place on 20 and 21 November in Brussels.

The colloquium coincided with the publication of a series of EU documents related to gender equality, including  a special Eurobarometer on gender equality in the EU, an Action Plan to tackle the gender pay gap, a special Gender Equality Index on violence against women by the European Institute for Gender Equality (EIGE) and an article by the EU’s Fundamental Rights Agency (FRA) entitled ‘Challenges to Women’s Human Rights in the EU: Gender Discrimination, Sexist Hate Speech and Gender-Based Violence Against Women and Girls.’ Having had the opportunity to contribute to the latter by providing case studies of misogyny in the Netherlands, I was curious to know in what way the EU intended to put the information to use. And so I boarded the Thalys train to Brussels on a rainy November day. The location proved to be much less gloomy, as the colloquium took place in the rather fancy Palais d’Egmont. The guests participating in the roundtable sessions were just as colourful, seeing as the event brought together politicians, researchers, journalists, NGOs, activists, businesses and international organisations to discuss how to best promote and protect women’s rights in the EU.

In his opening statement, Timmermans reiterated the need to make use of the momentum created by the #MeToo campaign, saying: ‘We must use the current focus on these issues in the media and politics to turn principle into practice. Women across Europe have the right to equality, empowerment and safety, but these rights are not yet a reality for far too many women.‘ He showed himself hopeful, referring to the results of the special Eurobarometer which indicated that 9 out of 10 Europeans considered that promoting gender equality is important for society, the economy and  for them personally. This reflects what Michael Kimmel, expert on men and masculinities, pleads for when he later reiterates that to get men on board – which is essential for reaching gender equality – we not only need to have them understand that gender equal societies are happier and more prosperous societies, but we need to make the case to them personally. Gender equal relationships are healthier and happier as well.

Still, many present expressed worries about the current populist backlash which, Timmermans said, “worldwide, women are always the first victims of.’ David Paternotte of the Free University Brussels spoke of attacks against what opponents call the “ideology of gender.” Representatives from Eastern Europe provided ample examples of this trend, such as Barbara Nowacka, leader of the Polish pro-choice movement, who in her home country fights a bill that might put women in prison for 3 years for having an abortion.

While sexual harassment and violence against women, logically, were among the main themes being discussed, other topics high on the agenda included the gender pay gap, work-life balance and political representation. Many marked gender stereotyping as the underlying problem, which not only limits girls and women but also boys and men. Liri Kopaci of the Council of Europe highlighted that from a very young age, boys and girls are told very different things, which has a major impact on the jobs they choose, their role in family life and how they see their own bodies. Anthropologist Wim Slabbinck pled for “more empathy for boys and more ambition for girls.”

Where to go from here?

Many participants stressed the need for a human rights based approach. Kate Gilmore, UN Deputy High Commissioner for Human Rights reminded us that all Member States recognised human rights when they signed up for the UN. They are what makes us human and that which cannot be taken away from us. Michael O’Flaherty, director of the FRA said to be embarrassed that over 20 years after the Beijing Platform of Action, we still ask ourselves whether women’s rights are human rights, in Europe of all places. He pointed out the necessity of gender mainstreaming, saying that he “… cannot think of one policy field that would not benefit from a gender sensitive approach.” Data collection and monitoring were awarded equal importance. Timmermans noted in this respect that men are willing to strive for gender equality, once they have seen privilege. Yet to see privilege, we need the facts. Do we have all the facts? Many also have high hopes for legal measures such as the Istanbul Convention, which the EU has signed and according to Ayçe Feride Acar, President of GREVIO – the body responsible for monitoring its implementation – “has teeth.” Whether the EU will manage to effectively seize the momentum created by #MeToo remains to be seen. The fact that the topic of gender equality is being discussed at such a high level does, I would say, give ground for hope.