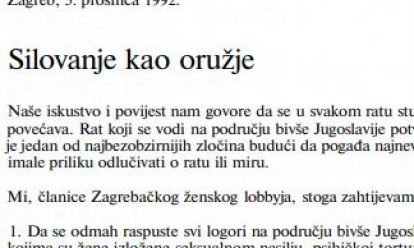 Summary:
Women gathered in the informal group Zagreb Women’s Lobby issued a public appeal to world governments, regimes, and all world women’s and peace organisations concerning rape during wartime. The appeal is related to the escalation of violence against women in contemporary wars in former Yugoslavia. Members of the lobby demand immediate closure of prisoner camps in former Yugoslavia, treatment of rape as a war crime and the subsequent change of the Geneva Convention, as well as an immediate establishment of independent women’s team and crisis centres for raped women. The appeal ends with rejection of all forms of manipulation with victims, their number, nationality, and testimonies, that could be abused for nationalistic and war propaganda.

This book is a subjective biography of “AnA”-one of the most important women’s NGOs in Romania after 1989.

This text analyses the relationship between presence and absence of women in politics and decision making process and cultural patterns of femininity and masculinity existing in Polish culture.

In order to influence a planned revision of The Parental Leave Act a coalition of the women’s movement, trade unions and political parties on the left wing launched a campaign in 1980.

The book maps the roles and activities of women within civil initiatives in Croatia from a self-referential position, based on personal experiences of women engaged in civil society within two decades.