Summary:
The anthology is a result of the 1960’s sex role debate. It consists of 13 articles, most of which are based on academic research in the field of social sciences. The first texts concentrate on analysis of this debate and of activism of the association “Yhdistys 9”, which promoted so called radical sex role ideology and was active in demanding day care reforms. Analysis of different responses to and consequences of the debate are made as well as comparisons between Finland and Sweden.
Articles about paid work, day care, sexuality and double standards, discrimination of singles, the role of the association “Yhdistys 9” in societal change, men’s role and women’s position in the Soviet Union compared to the United States are included.
The article about motherhood by Eeva Kilpi is not included in the Fragen digitisation.

The different authors share the view that current rigid sex roles are social constructions, obstacles for equality and stem from traditions which don’t belong to a modern society. The book promotes the idea that men and women should have similar rights and duties as workers and as family members; individuals should have free choices according to their personal goals, regardless of their sex. 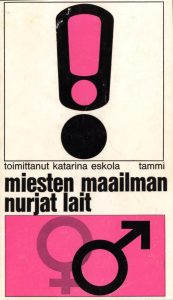 The leaflet named gender based violence in the Sozialistischer Deutscher Studentenbund (SDS) as the hindrance for work and happiness in a new society.