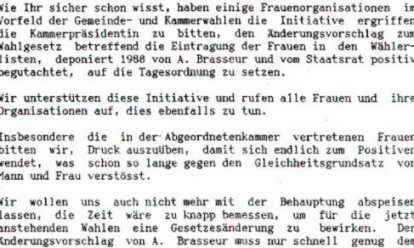 Summary:
This petition consists of 3 documents from 2 years: a cover letter (1993), a background text about the naming regulations (1993) and an open letter to the parliament (1994). Cover letter: several women’s groups petition to change the electoral law. They demand that, in the case of married women, their birth names are used on the electoral register instead of their husbands’ surnames. Background text: Over the centuries women were deprived of many rights and made “non”-persons” by being referred to by the names of their husbands. In Luxembourg, under the Napoleonic Code, every person receives a name at birth that does not change after marriage. However, the practice of how names are used does not correlate with these regulations. Several administrative bodies insist that women use a double name. In an open letter to the parliament prior to the 1994 national elections the petition organisers remind the politically responsible of their duty to protect women’s autonomy and their rights.

The book represents the first attempt in the Czech Republic to describe gender relations in organizations.

The author develops theoretical foundation of women’s history, starting from the critique of traditional historiography and its false universalism.