Summary:
This one-off publication, written by Info-Lesbiennes (working group of Mouvement de Libération des Femmes Luxembourg), wants to inform about female homosexuality, break down prejudices and taboos and build self-confidence among lesbians. It contains articles about the historic development of homophobia, lesbian movements in France, Germany and the USA, about the Luxembourg
working group, about the discriminations through law, media and church, about the stigma created by doctors and psychiatrists and about the law regulations in Luxembourg (including documents by the Council of Europe and the WHO). The brochure features an interview with Info-Lesbiennes, personal narratives and a bibliography of lesbian literature. In November 1981 an MLF-endorsed
lecture on the historic development of homophobia had caused a vivid debate. Shortly afterwards, in January 1982, Info-Lesbiennes was founded. Lesbianism is seen as one form of emancipation. 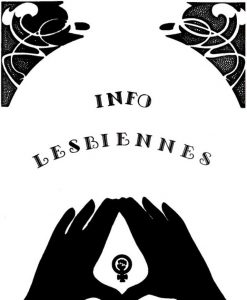 The booklet was widely distributed throughout the country. Every marrying couple received a copy in the official ceremony.

Information about frigidity, the drill for femininity, the myths of motherhood, the media fabrication of gender and the academic legitimation of oppression.

The text describes the everyday difficulties of lesbian life and different methods of hiding or deceiving.