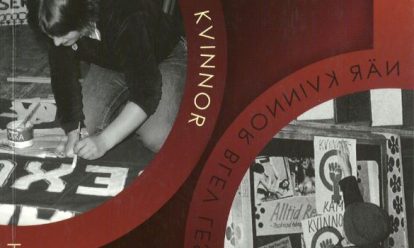 Summary:
This speech, published in Hanna Hallgren, When Lesbians became Women, 2008, pp.233-235, is one of the key texts in Swedish lesbian feminism and is frequently quoted in the movement’s publications. Parts of it are based on the Radical lesbians manifesto “The Woman-Identified Woman.” The speech was given by Eva Bohlin, one of the founders of the Lesbian Front, but it was composed by the whole group. The speech links the lesbian issue to the feminist issue, a new and for many people provocative thought. Also within the women’s movement. Despite the fact that many feminist activists lived together with women and despite the fact that it has been so for as long as the women’s movement has existed. Lesbians have been the ghost, that anti-feminists
have used in order to push women back to the heteronormative order. The new slogan was: Lesbian struggle is feminist struggle.
Feminist struggle is lesbian struggle. To achieve the liberation of all women, the feminist movement must fight on three fronts simultaneously: Against patriarchy, against capitalism and against heteronormativity. The power to implement the changes is to seek in the solidarity, community and love between women. / Summary by Eva Borgström

This book is an analysis of the access of Romani women to reproductive health in post-socialist Romania.

Biography of the first Latvian woman President. Born in Latvia, spent most of her life as a refugee in Germany, Morocco and Canada, made there an academic career as psychologist.

The article presents a collection of interviews with a number of NGO’s in Cyprus with an attempt to visualize the emergence of alternative agenda’s and structures at the background of ethnically divided Cyprus.