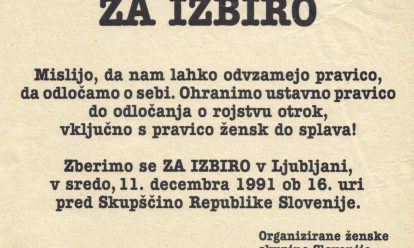 Summary:
The right to freely decide upon a child’s birth was included in the Yugoslav constitution in 1974. In order to protect this right and to include it in the new Slovenian constitution, an ad hoc coalition “Organized women’s groups of Slovenia” distributed the leaflet “For choice”, calling for demonstrations on December 11th 1991 at the parliament. This was only one of the actions on this subject. A wider coalition of women’s groups, Coordination of syndicates and several political parties undersigned a public statement titled “For the constitutional right for choice”, pointing out, that there are only 11 per cent of women in the parliament assembly and only one in the constitutional commission, which is not enough to decisively influence the text of the constitution, even the paragraphs directly concerning women. Therefore they called on the constitutional commission to preserve the right to freely decide upon a child’s birth and to state at least in the explanatory part, that this right includes also the right of a woman to make an abortion and to bind the state, to assure access to this right. The campaign was successful. Article 55 (Freedom of choice in childbearing) of the Slovenian constitution states: “Everyone shall be free to decide whether to bear children. The state shall guarantee the opportunities for exercising this freedom and shall create such conditions as will enable parents to decide to bear children.”

Collection of texts illustrating the evolution and history of Romanian feminist movement.

Several administrative bodies insist that women use a double name. In an open letter to the parliament prior to the 1994 national elections the petition organisers remind the politically responsible of their duty to protect women’s autonomy and their rights.