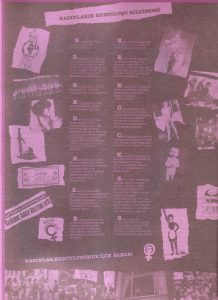 Summary:
The database field ‘Image cover’ contains the Turkish document. An English translation is uploaded in the field ‘Digital doc’. A “Feminist Weekend” was organised on 11-12th February 1989 in Ankara upon the call of various feminist groups. Actually it was a nationwide congress named the “ Feminist Weekend” where the policies and the strategies of critical feminist issues on the agenda are discussed. At the end of this meeting a common declaration is prepared by the contribution of all the participants.
It is called the Declaration of Women’s Liberation. The congress has also decided to begin a campaign called “Our Bodies belong to us and No to Sexual violence”.

A classic debate article arguing that the Swedish society’s contentment with its degree of gender equality was unfounded.

The feminist practice is set up as a long and difficult analysis about what history and culture have removed.

This manifesto summarizes in six points the message of the debate book “Manifestations. Everyday feminism in the 21st Century”.