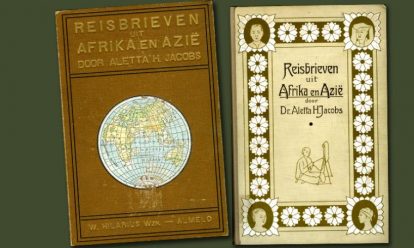 Aletta Jacobs (1854-1929) went traveling through many countries in the years 1911 and 1912. She made this journey in order to stay informed about the position of women and to promote women’s suffrage. Throughout the duration of this trip she was accompanied by Carrie Chapman Catt, the president of the International Woman Suffrage Alliance.

Jacobs’ travel letters were originally intended as daily newspaper articles and were published in the Dutch newspaper de Telegraaf. The letters first describe a six-week journey through Sweden, where she attended the sixth international congress of the International Woman Suffrage Alliance, and around the North Cape. Furthermore, the travel correspondence also includes a description of a nearly year-long trip in Africa, the Middle East and Asia.