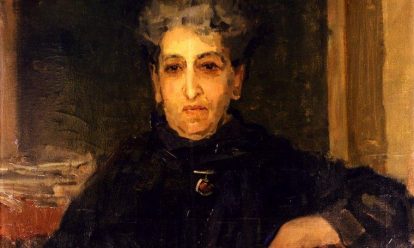 The famous painter Isaac Israels painted Aletta Jacobs at least three times. This portrait was painted in 1919. His sister, Mathilde Cohen Tervaert-Israels (1864-1945), gave it to the International Archives for the Women’s Movement (IAV) in 1936 on the occasion of its opening on December 19.

Mathilde Cohen Tervaert-Israels was, among other things, president of the Vereniging Onderlinge Vrouwenbescherming (Association for mutual protection of Women) and member of the Dutch Provincial Council of the province of Zuid-Holland. She was also a friend of Aletta Jacobs. During the memorial service for Aletta Jacobs in 1929, she said:

‘In the autumn of her life, Aletta Jacobs was given the opportunity to behold a harvest, richer than she could have ever expected. The universities completely open to women; civic rights obtained; birth control in the center of attention. And even though recognition from the authorities has always been lacking to the amazement and vexation of her friends, she has enjoyed all this to the fullest and she nourished herself in the love of the younger generation, who cherished her as an icon’.

The feminist and journalist Welmoet Wijnaendts Francken-Dyserinck (1879-1956) has often been called the counterpart of Aletta Jacobs.