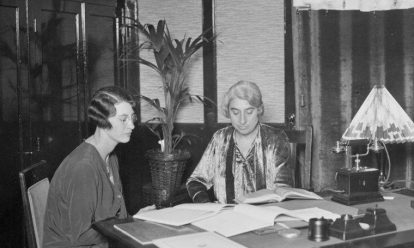 Clara Meijers (1885-1964) worked as an executive secretary of the Rotterdamsche Bankvereeninging (Robaver) in Amsterdam.
She had a dream: founding a bank for women, run by women. Her objective was to be able to grant credit to women without means who wanted to start their own company, a construction now better known as micro financing. Her ideal became reality, although altered, in 1928. The Robaver opened a ‘women’s bank’ as a branch.
Clara Meijers became the managing director and Mr. C. Kleinhoonte her deputy manager.

In the picture, you see Clara Meijers sitting behind her desk with Lien Kleinhoonte at her left. Their first customer was none other than Rosa Manus.
This picture was among the returned archival items from Moscow, in 2003.

On the 23rd of January 1937, a special dinner took place in Utrecht. It was organized by the Jongeren Werkcomité of the Nederlandsche Vereeniging voor Vrouwenbelangen en Gelijk Staatsburgerschap (Youth section of the Dutch Association for Women’s interests and Equal Citizenship). We do not know for sure, but it is possible that the women present […]

Just like her mother Queen Wilhelmina, princess Juliana showed a lively interest in the work of Dutch women’s organizations. This letter, dated December 3rd 1945, proves that. Already at the beginning of the Second World War in 1941, prominent women from major Dutch women organizations of all denominations and political context, came together to discuss important problems originating from the […]