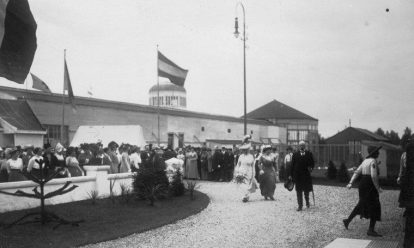 Queen-mother Emma, prince consort Hendrik and crown princess Juliana also visited the exhibition. The exhibition lasted from the 2nd of May until the 30th of September and attracted more than 300,000 visitors.

The aim of the exhibition was as follows:

‘to testify that the Dutch woman in her fight for freedom didn’t come last among the European countries’.

Initiative-takers were Mia Boissevain, biologist and feminist, and Rosa Manus, nationally and internationally renowned fighter for women’s rights and peace. Wilhelmina grew in the course of her reign into an idol for a large number of prominent feminists, including Rosa Manus.

In nearly all archives of women’s organizations numerous telegrams and invitations to and from the queen can be found. The picture shows queen Wilhelmina (in white) and Rosa Manus on their way to the Indische Huis (House of the Dutch East-Indies) at the exhibition.

On the 23rd of January 1937, a special dinner took place in Utrecht. It was organized by the Jongeren Werkcomité of the Nederlandsche Vereeniging voor Vrouwenbelangen en Gelijk Staatsburgerschap (Youth section of the Dutch Association for Women’s interests and Equal Citizenship). We do not know for sure, but it is possible that the women present […]

Strolling through Haarlem’s Kenaupark, one can find the most beautiful villas. In 1938 number 6 was purchased by the Flatstichting voor Vrouwen door Vrouwen (a foundation that wanted to build apartment buildings for women by women). The initiative originated from E.J. van Waveren-Resink (1877-1946) in the 1930s. The establishment of independent housing for women was very progressive at […]

On 25 November 1935, the charter of foundation of the International Institute for Social History was signed. The IISH was founded by Prof Posthumus, husband of Willemijn Posthumus-van der Goot, one of the founders of the IAV. Both institutes started on the premises of Keizersgracht 264. The IISH made two rooms available for the sister […]