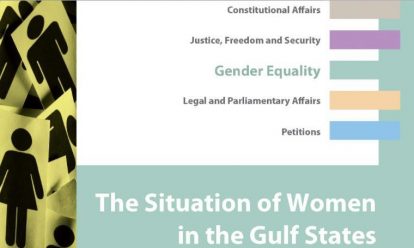 Commissioned by the European Parliament and in cooperation with two partners, OQ Consulting BV and KARAT Coalition, Atria conducted a study in 2014 on the situation of women in the Gulf States.

This study focuses on rights of women and gender relations in Bahrain, Iran, Iraq, Kuwait, Oman, Qatar, Saudi Arabia and The United Arab Emirates. Various socio-cultural, political and economic issues are in this respect taken into consideration in individual country reports and an overall review. The region’s historical and cultural heterogeneity are at the centre of the analyses.

Political participation, economic independence, education, family and health are the main themes taken into consideration, especially from the legislative perspective, in shedding light on the situation of women in these countries. The study shows that, for instance, whereas the number of highly-educated women in most of these countries is relatively high, women’s labour force participation and economic independence appears to be rather low. The role of women in the current political developments in different Gulf States in the aftermath of the ‘Arab spring’ is another topic discussed in the report. Moreover, an overview of EU-activities in the region concerned with women’s rights is presented.

Based on the research findings, recommendations are provided to the European Union in order to improve the situation of women in the region.

The situation of women in the Gulf States: a study (pdf)

What are the results of the Dutch gender equality and women’s rights policies 20 years after the Fourth World Conference on Women in Beijing?

The result of the international debate which approached questions as: How can ‘Europe’ ensure greater gender equality? And what influence can citizens exert on these matters?