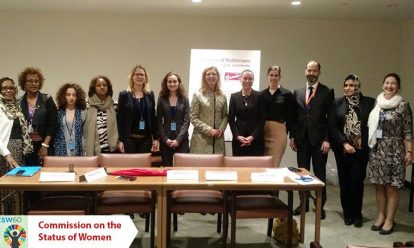 Five days have passed since my arrival in New York and introduction to the rollercoaster that is CSW.  Five highly eventful days, filled with countless new impressions and meetings with remarkable people. Now that I have gotten over the worst of my jet lag and the initial excitement of walking around in the UN building, it is time to try and make sense of the jumble of my first experiences.

One of the first parallel events I attended on Friday, was all about meeting remarkable people. The event, organised by WO=MEN and Dutch parliamentarian Ingrid de Caluwé, marked the international launch of the ’Gender Multi-Party Initiative’, an alliance of politicians for the strengthening of women’s rights. The idea for this cross-party joint venture originated in the Netherlands, where in December 2012 nine political parties, ranging from the radical left to the far right on the political spectrum, committed to far-reaching cooperation on the topic of women’s human rights. The aim of forming a similar international alliance of politicians is twofold. Firstly to strengthen mutual support through an international alliance of politicians (in countries without functioning parliament): sharing  law proposals, advice, innovative ideas and lessons learned. Secondly to support the creation of national political alliances for women’s rights. Alliances that gather politicians from opposing parties  can sometimes be fruitful.

Ingrid de Caluwé, chair of the Dutch Multi-Party (MPI) Initiative, opened the meeting, stating that by ‘going international,’ the MPI was intended to ‘support brave women worldwide.’ Seven of such courageous women from the MENA region took seat on the panel to highlight the potential importance of a Multi-Party Initiative for gender equality and women’s empowerment in their respective countries:

All of them agreed that an international network of national MPI’s will constitute a platform for politicians advocating women’s rights in young or developing democracies. As Zahra Langhi put it: it will contribute to localising the global and globalising the local. After all, change starts with awareness raising, so that the connection between the people on the ground and policy makers can be made. The political experience of women policymakers in the MENA region is, however, not yet developed. An MPI network would thus be instrumental in sharing experiences and knowledge.

The aforementioned side event is just one example of the many inspiring meetings taking place during CSW60. Besides the side events, work on the language of the outcome documents  (the Agreed Conclusions of CSW60 and the various resolutions under discussion) is constantly ongoing, so that even on the weekend, work goes on. And even in those brief moments of spare time, the CSW is never far away. After a hectic first few days, I decided to reward myself with a visit to the Statue of Liberty on Sunday afternoon, intending to make the most of my New York time. Little did I know, that even here, I would be confronted with the history of women’s rights. The statue, a large and imposing female figure symbolising liberty in the United States, was unveiled on October 28, 1886, at a time when women did not have the right to vote. During the unveiling ceremony, which – shockingly – women were not allowed to attend, suffragettes, aware of the discrepancy, circled the island on a boat yelling protest speeches.  Learning this was just another reminder of the long way we have come since then, as well as the long road still ahead. While nowadays women can vote in most parts of the world and visit the most well-known landmark of the US, much work remains to be done. Starting with the official negotiations of CSW60’s Agreed Conclusions first thing tomorrow.