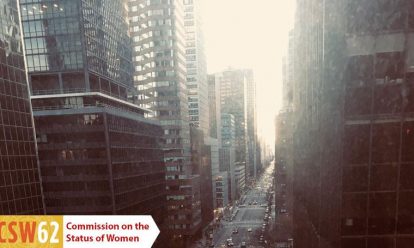 It is hard to miss the irony in convening in one of the largest metropolitan areas in the world and the summum of big city life that is New York, to discuss women and girls living in rural areas. This is, nevertheless, exactly what I have come here to do as I attend the 62nd session of the UN Commission on the Status of Women, which will focus on the Challenges and Opportunities in Achieving Gender Equality and Empowerment of Rural Women and Girls.

It is an important theme as the significance of rural women can hardly be overestimated. They make up over a quarter of the total world population and approximately 43 per cent of the agricultural labour force in developing countries. They are active agents of economic and social change and environmental protection who play crucial roles in ensuring food and nutrition security, eradicating rural poverty and improving the well-being of their families and communities. They are, in other words, a sizeable group with a lot of potential, yet at the same time often overlooked and marginalised.

Many of the difficulties faced by women throughout the world are magnified in rural areas. Owing to gender and geographic inequalities, rural women and girls are disproportionally affected by poverty, exclusion, gender-based violence and the effects of environmental and climate change. Cultural and religious norms related to the roles of women and girls in society tend to be more static in rural environments and may greatly hamper women’s empowerment. Harmful practices, such as child marriage and female genital mutilation, are more widespread in rural than in urban districts. Living in more remote areas also means diminished access to a wide number of facilities which are fundamentally and universally crucial to women’s opportunities to personal, social and economic development, including education, (nearby) clean drinking water, energy, (digital) technology, social and financial services and (sexual and reproductive) healthcare. Additionally, rural women face (legal) obstacles the number one resource in rural areas, namely land ownership and tenure.

About them without them

Following the above, this year’s priority theme to a large extent is a developing issue and thus – unsurprisingly – a topic close to the hearts of African delegations in particular. It is therefore especially deplorable that a great number of women selected to attend the CSW from exactly these countries – many of them young women living in remote, rural areas – have been denied travel visas by US embassies. The official opening of the CSW, which normally is a festive ceremony, this year was marked by women’s rights activists protesting the course of events. Some have even coined the possibility of moving future CSW sessions from New York to outside the US, in order to make the process more inclusive.

With the women this CSW session is supposed to be about largely absent, we feel the pressure of making sure the voices of all (rural) women and girls are reflected in the Agreed Conclusions. That is why when given the chance to present Dutch civil society priorities for CSW62 at the Dutch Permanent Representation in New York last week, we – my WO=MEN colleague Margriet and I –  stressed the importance of pushing not only for the priority issues that resurface every year, but also linking them to and paying special attention to the challenges faced by rural women and girls in particular, especially in the Global South. Whether these issues will be well-integrated into the text remains to be seen. Now, at the end of the first week, negotiations have only just begun and the signals coming from the conference room are mixed at best. The good news is that there is a clear sense of urgency among delegations, as five years ago, when the CSW discussed rural women for the first time, they failed to reach agreement and produce an outcome document. Knowing that the world is watching and that failing again would mean very bad publicity indeed for all parties involved, delegations might be more prone to cooperation. However, it also means that a watered down text as the result of over-compromising is a realistic danger. The moment of truth is getting close, with the second week about to start…

Atria and WO=MEN are jointly responsible for the coordination of input from civil society to the governmental delegation during the 62nd session of Commission on the Status of Women in New York. Follow us on Twitter: @AtriaNieuws and @genderplatform.

Women are the centre of attention here in New York for the coming two weeks. So what is more appropriate than to write my first blog about some remarkable women, women of the past as well as women in the present.