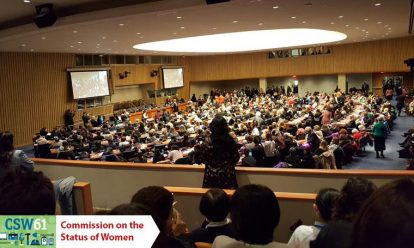 Women’s work as a lifelong challenge

The CSW61 core theme of women’s empowerment in a changing world of work reflects lifelong challenges. They look pretty different across the world.

The commonalities and differences were at the table at a side event on the ‘lifecycle approach’ at the end of the first week of CSW6. All panel participants – from India, Denmark, Norway, Egypt and Rwanda, and for-profits like Credit Suisse – called for a need of social transformation of attitudes towards the ‘women’s burden’ and girls’ education. All agreed that the uneven distribution of the burden of care onto girls and women is globally an obstacle to the full development of women’s economic potential (unpaid child care, domestic care, care for elderly and frail ). A deeply rooted cultural gendering of unpaid labor, tied up with solid social-economic and political interests has no quick fix. Change will take a long and complex series of steps, as the report of the Secretary-General for this CSW61 lays out in detail.

Given the complexity of the structural challenges worlwide, in this panel the emphasis was on the small steps toward solutions, focusing on what partnerships between private and public entities, profit and non-profit, could bring.

An early start in education was considered a no-brainer in order to change children’s perspective on their professional wishes and ambitions. Again, the depressing recently published research was brought forward, indicating that at the age of six, girls in the US already feel less confident about their professional capacities than boys.

The Plan International Saksham programme focuses therefor on young women from the poorest slum areas in New Delhi. They are trained to become professionals, and they develop a self-confidence and ambition that is a priceless asset. Often the girls are the first females in their family to get a job.

Credit Suisse bank presented promising results of a new programme focusing on combined development of life skills, professional and financial education of girls. Projects in Brazil and India indicated clear improvement of self-confidence (in life skills) and increase in financial skills necessary for entrepeneurship (the majority of girls wanted to start their own micro-enterprise).

Amidst these uplifting presentations, the undermining role that gender based violence can play in the world of girls’ education and work could however not be avoided. An Egyptian girl of 13, who had been awarded as a local role model for girls, presented at CSW61 her ambitions for the future. She wanted “to change attitudes in my local community towards girls going to school”. Only when pressed, and encouraged by the translator – as if she was embarrassed to speak out -, she told how many of her girlfriends are prohibited by parents to further attend school. Due to the pervasive sexual harassment in the street, parents fear that the family honor is tarnished.

This morning panel of 100 participants was relatively small compared to the afternoon session at UN Head Quarters. Packed with over 500 participants, UN WOMEN and the UN International Labor Organization (ILO) presented a high level panel with representatives from various NGOs and governments, some of whom play a pioneering role in providing legal protection to enhance women’s participation in the labor market (inter alia Canada, Australia). Take for example Australian law, allowing for a 15 days paid leave to recuperate when a woman is the victim of domestic abuse. The global UN/ILO Convention on women’s economic empowerment, that is in preparation for 2018, was presented as one of the various routes that lead to changing attitudes towards and legal regulation of women’s work. There was also the passionate call for a decent basic wage for waitresses (and waiters) in the US. Research shows that the current dependency on tips to earn a minimum salary puts women in particular in a vulnerable position for sexual harassment at work. Another example of the often luring intersection in the background between women’s work and gender based violence.

Another day at CSW61 where the global and the local met deceptively seamless. It underlined one thing: let’s keep thinking glocal!

The most direct effect of Trump’s presidency on women’s rights to date has been the reinstatement and expansion of the global gag rule, which bans US federal funding for NGOs in foreign countries that provide abortion services or abortion advocacy.

The UN can be a bit of a closed fort. Especially now that the negotiations are in full swing and taking up all of the time and attention of the people present here, it takes a while for news from the outside world to get through the thick cement walls of the UN Headquarters.