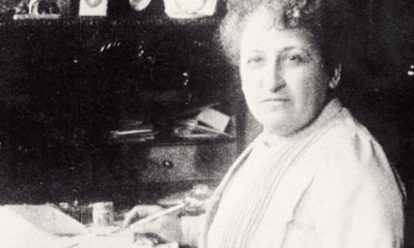 Aletta Henriëtte Jacobs was born on February 9, 1854 in Sappemeer, as the eighth child of a Jewish doctor’s family. Her parents were Anna de Jongh and Abraham Jacobs. At the age of thirteen she left the village school. The ladies’ school she attended thereafter became a nightmare for her, and after two weeks she refused to return to school. Aletta then stayed at home. During the day her mother taught her housework, while in the evenings she learned French and German. Later on her father taught her Latin and Greek.

Aletta Jacobs as student at the University in Groningen

In 1869, for the first time, a girl took the admission examination to become a pharmacist’s assistant; Aletta Jacobs did the same in 1870. After some effort she was permitted to attend classes at Groningen University for a period of one year, she started on April 20, 1871. On May 30, 1872 her request for permanent admission was granted. (See Jacobs Archives, inventory no. 596.) In October 1876 she continued her studies at Amsterdam University. She received her medical degree on April 2, 1878, and her medical doctorate on March 8, 1879. During these years Jacobs became concerned with social injustice. Among other things, she learned how absurd the Dutch marriage laws were.

In March 1879 Aletta went to London for a few months. She had decided to go because she had read in British women’s magazines about how professors, doctors, and students were actively sabotaging women’s attempts to study medicine in England. She returned to Amsterdam to attend the conference on the advancement of medical science on September 8-15. Afterwards she began to practice as a doctor on the Herengracht, in the house of a widow from whom she rented a few rooms.

Through B.H. Heldt, leader of the Dutch General Trade Union, Jacobs was introduced to other members of the trade union’s board. In the winter of 1880 Heldt made available several rooms in the union’s building, so that Jacobs could offer a course for women to teach them the rudiments of hygiene and of caring for infants. One result of these classes was that she decided to hold a free clinic two mornings a week for destitute women and children, a practice she continued for fourteen years. These free clinics for poor women brought her in close contact with the issue of birth control. Early in 1882 she read about the use of the Mensinga pessary, which from then on she always prescribed. She maintained her clinic until 1904, when she celebrated the twenty-fifth anniversary of her doctorate in medicine on March 8, after which she retired from her practice.