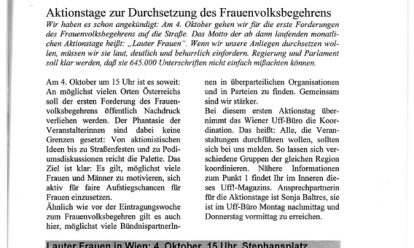 Summary:
The 11 demands deal with the economic and social security of women: allocating subsidies and contracts to companies offering equal opportunities; equal pay for equal work and a minimum wage; equal rights for part time and marginal employment; no deduction of partner’s income for welfare; fostering equality through educational measures and annual gender-specific statistics on profession and education; provision of all-day qualified daycare facilities for children and social security for daycare providers; 2 years of maternity allowance for all single mothers; legally guaranteed claim to part time work for parents and the right to return to full time work; extension of job retention period after maternity leave; right to basic pension above the poverty line, obligation of life partners to contribute to pensions for partners who are not gainfully employed and credit for raising children and caregiving; no increase in the retirement age of women until actual equality has been reached.

Text of the Austrian Women’s Referendum (Austria):
Summarising questions regarding the identification of texts within the context of the FRAGEN project.
1. Is the document related to any particular event?
yes

3. What does the document concern (According to: Beijing’s 12 critical areas of concern)?
Use the specifications major or minor to indicate the importance or the specification n/a if not applicable.
– poverty: major
– education: major
– health: N/A
– violence: N/A
– armed conflict: N/A
– economy: major
– power and decision making: major
– institutional mechanisms for the advancement of women: minor
– women’s rights (including sexuality): N/A
– media and culture: N/A
– environment: N/A
– girl child: N/A
– knowledge and science: N/A

4. Was the document written as a manifest?
yes

5. If no, did the document get the status of manifest afterwards?
null

Problematisation of gender in the text

7. Does the document deal with causes for the established problems/gender inequalities?
yes

8. Who or what is seen to cause the problem(s)?
Use the specifications major or minor to indicate the importance or the specification n/a if not applicable.
– economy/the market: major
– patriarchy: N/A
– biology: N/A
– sexuality: N/A
– symbolic order: N/A
– social relations: major
– religion/the church: N/A
– traditions/culture: N/A
– polity: major
– men: N/A
– women: N/A

The broad framing of the text

11. Does the document refer to any of the following broader normative goals or ideals?
Use the specifications major or minor to indicate the importance or the specification n/a if not applicable.
– equality (whether gender equality or other equality): major
– human rights (including dignity): N/A
– economic development (including economic growth): minor
– capabilities and well-being (including health): N/A
– law and order: N/A
– social justice: major
– autonomy: N/A
– solidarity: N/A
– liberty/liberation: N/A
– empowerment: N/A
– democracy: N/A
– emancipation: N/A
– difference: N/A

12. Does the document call for (a) particular action(s)?
yes

13. Does this call ask for any of the following?
Use the specifications major or minor to indicate the importance or the specification n/a if not applicable.
– awareness raising: N/A
– behavioral change: N/A
– political pressure: major
– mobilisation of civil society: N/A
– changes in laws or regulations: major
– redistribution of resources: major
– recognition of people, values or identities: N/A
– representation in decision making: major
– transformation: major
– (violent) revolution: N/A

14. Does the call for action involve that any of the actors below need to do something?
Use the specifications major or minor to indicate the importance or the specification n/a if not applicable.
You can specify the actors at question 15.
– national government actors: major
– any governmental gender or equalities machinery: major
– national market actors: major
– actors at the EU level (e.g. Council of Europe): N/A
– international actors (e.g. CEDAW): N/A
– women’s NGO or women’s movements (including feminists): N/A
– gender experts (academia/professionals): minor
– other civil society actors (including trade unions): N/A
– men: major
– women: major
– intersectional: N/A

16. Does the document see cooperation with the state as positive, negative or neutral?
positive

17. Does the document call for the state to consult with feminist organisations or women’s movements
(Can include the authors of the document)?
no

18. Does the document call for cooperation with others or for alliance with others?
yes

The article confronts the issues that affected and impacted upon post-colonial feminism as a branch of feminist practice.