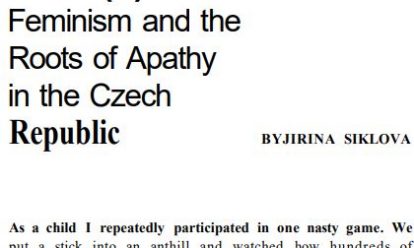 Summary:
Description of political and social situation in the Czech Republic and influence of communist political regime on feminism and women’s right in the Czech Republic. Jiřina Šiklová talks about the situation before and after the Velvet Revolution in 1989. Velvet Revolution was one of the major milestones in the Czech society. Process of all-society changes, which initiated with repression of student’s protests in November 1989 followed with series of nationwide demonstrations against the regime and leaded to downfall of totalitarian Communist Party and transformation of Czechoslovak Socialist Republic to parliamentary western style democracy.
Before 1989, the word “feminism” was almost never used to designate any phenomenon present in Czechoslovakia. It referred to western ideology which was presented as not applicable to the situation of Czech women. But this fact is only a question of naming, and even without using the word “feminism”, the Czech have a long tradition of dealing with women’s issues.
Jiřina Šiklová is the Head of the Department of Social Work at the Philosophical Faculty of Charles University in Prague.
Dr. Šiklová is a member of the Czech Helsinki Committee – an association devoted to the protection of human rights. She is also founder of the Gender Studies Center in Prague; signatory of the Charter 77; and was a dissident during the Communist rule in Czechoslovakia.

The ERRC “Shadow Report” for CEDAW (2007) highlights the most relevant facts on the situation and problems of Roma women in Hungary.

The author argues against the widely accepted view in Estonia that some women become prostitutes as a result of free will and that sex work is just like any other work.