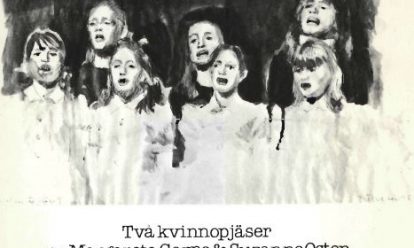 Summary:
When the play Jösses flickor opened at the Stockholm City Theatre in December 1974 it was considered a political manifestation of the success of the Swedish Women’s Liberation Movement. Soon the play was staged at other theatres in Sweden and abroad. Consequently it contributed greatly to spreading the politics of the Women’s Liberation Movement and to recruiting new participants,
but also to creating a feeling of community and strength among participants already within the movement. The chronicle of 50 year’s of struggle for emancipation and gender equality showed sisterhood but also women’s efforts to solve the puzzle of fitting love, children and work into their daily lives. The histories and traditions of women predecessors were used to create a vision of a society built on alternative ideas. Thus it marked and contributed to the ideas of the new direction in the Swedish feminist struggle, commonly known as the Women’s Culture Movement. In recent years the play has been revived at Swedish theatres and has become a modern classic. / Summary by Birgitta Johansson

An report on the mapped existing data on trafficking of women for sexual exploitation in Cyprus.