Summary:
The shadow report was produced as a response to and women’s critique of the work of the official committee, from which women and women’s specific situations were largely excluded. The document consists of research and suggestions made by the women’s shadow committee and comments on it by different interest groups. Different aspects of working time and possible changes are discussed. The main perspective is equal treatment. The authors state that society should not be based on gendered division of labour and that current differences in men’s and women’s time use should be eliminated. Special arrangements for women are thus questioned, whereas more flexible working hours in general are seen as an important goal. This also includes suggestions for reforms in the position of parents in the labour market: more family-friendly policies are demanded. Housework, family ideology and myths of motherhood are also discussed.
The main goal is seen to be generally shorter working hours for both men and women. This idea was rejected or criticized by many interest groups in their comments. The report also suggests a lower pension age. The committee suggests that working time solutions are to be seen as a part of general labour market policies, which in turn should be based on widespread analysis of societal, technological and economical change. Here so call “softer way of life” and reorganization of the relation between working time and free-time are also mentioned.
The shadow committee was an initiative of the Council for Gender Equality and political women’s organisations. Its members were mostly scholars and politicians, including Tarja Halonen who later became president. 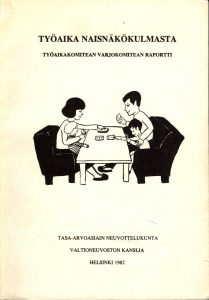 In this first issue, the family is analysed as a matter of politics and economics. The household and the role of women in the household is demystified and the authors discuss possible links between housework and national income, the historical evolution of family and the question of “housewives’ wages”, a political issue at the time.