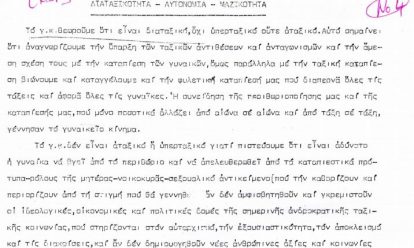 Summary:
Unsigned document published in the Bulletin of the Movement of Democratic Women, prepared by members of the Board of the Movement of Democratic Women (KDG) to be presented to their Nationwide Conference held 6-8 May 1982. The text explained why women’s question was beyond class differences, as women were still treated as second class citizens while issues such as their unpaid domestic work, men’s violence to women, all the disadvantages that women faced in work and education, were issues for all women, because of their gender and not because of their social origins.

The book is intended to be both a state and a reproduction policy ethnography in Romania.

Analysis of gender relations in Romania during the transition from communism period.