Summary:
The “Manifest of Female Revolt” (1970), published in ‘Let’s spit on Hegel; The clitoral woman and the vaginal woman and other writings’ is the first statement of the group. It contains many themes and issue which will be developed afterwards in the Italian Feminism. There are the importance of the separatism and the self-awareness, the claim of Difference instead of Equality, the criticism towards the marriage, the recognition of the women’s work and the demanding of an autonomous sexuality for women, far from male demands. Some of the most interesting group’s positions concern the abort related to the female sexuality, the criticism towards the marxist movement and the psycoanalysis (because of their female oppression and representation). Carla Lonzi elaborated these issue on “Let’s spit on Hegel” and “The clitoral woman and the vaginal woman” and other writings which intitled the book and are considered the continuation of the Manifest. Each text has been a manifesto on consciousness rising, sexual difference and female sexuality. Their works were based on writing as a political tool: they published their work by themselves and they also funded their own publishing house. 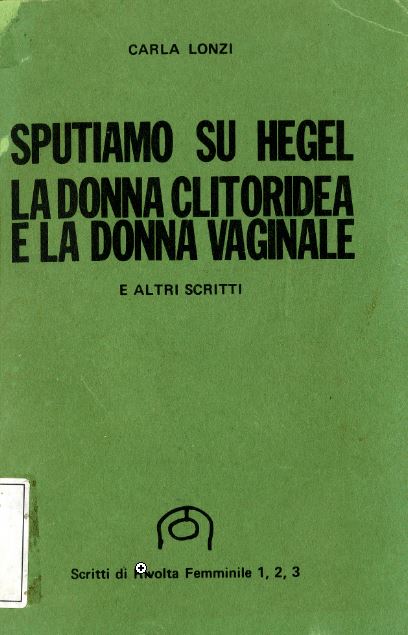 This book was an important contribution to the emerging Swedish research field of women’s studies in the late 1970’s.

Collection of interviews compiled and conducted by Michelene Wandor with women who had attended the Women’s Liberation conference held at Ruskin College in 1970.

In this book Tamar Pitch analyzes the relationships between women movements and law, focusing on the theoretical, political and cultural Italian debate and its international context.