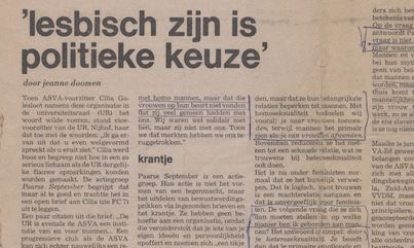 Summary:
In this article, Jeanne Doomen interviews the members of the activist group Paarse September (Purple September). The group, consisting of four women who knew each other from consciousness-raising group Purperen Mien, dissatisfied with the way the gay and lesbian association (COC) assumed that homosexuality was experienced in the same way by women as by men and with the fact that heterosexual feminists with whom they felt solidarity did not return that solidarity. The group attempted to raise awareness through their newsletter and through letters to other newspapers and magazines. In the interview, which made the group famous overnight, they stated that feminists needed to (re-)consider their heterosexuality as the essence of their oppression and that lesbianism was hence not (just) about sex but a political choice.

Flyer for a demonstration against the discrimination of women in the form of numerous inequalities: Unemployment of women. Part-time work allows women to combine work with having children, but pushes them back into traditional roles as housewives and mothers.

This is the first thorough in-depth research on women’s activities within the process of construction of the modern Bulgarian nation.

Manifesto written by a collective of socialist feminist groups.