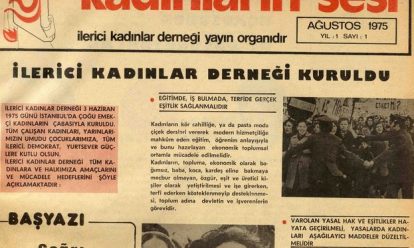 Summary:
This periodical has first been published in Aug. 1975 and ceased publication in Aug. 1980. It was closed down by the military just before the coup d’état in 1980. Similar periodicals with a Marxist approach have been published in those years. Kadinlarin Sesi is the biggest monthly periodical which reached up to 60 issues and a circulation of 30 thousand copies. It reflects the ideology of an era in which the issue of women’s emancipation was focused only in terms of class paradigm.
Selected headlines from the contents: Housewives want to work. – Struggle for equal pay for equal labour is a component of economic and democratic struggle. – Our rural women: labourer in the field, slave at home. – Campaign for a kindergarten in every office, in every neighbourhood. – Cooperation with Municipalities. – The women who elect who are elected. -21st of March is the day for fighting against racism. – No neutron bomb. – True equality in education, in job finding, in promotion. – Mothering should be considered as a social function. – Existing legal rights and equalities should be applied. – The Law Articles humiliating the women should be changed. – The women should be the vigilant defenders of peace, democracy, national independence and social progress. – Fascism and the Chilean women. – Cartoons: How should a striker’s wife behave during the strike? – Who is celebrating the Women’s Year in Turkey and how? – What are the world women doing towards the end of 1975?
Due to copyright restrictions only the first issue and the English version of no. 49, Aug. 1979 have been digitized and uploaded.

This text was later used as a manifesto to build up the focus on class struggle supported by some within the MLF.

Reflections on the present situation and the possibilities of women’s emancipation.

This is the first report on the state of human rights of sexual and gender minorities in Republic Croatia in year 2002.

The text is written by the women gathered on the Second Yugoslav feminist meeting held in Zagreb from 16 to 18 December 1988 and contains conclusions from the meeting and feminist political demands.