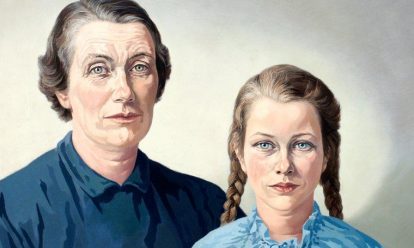 The renowned painter Edgar Fernhout made this beautiful double portrait of Willemijn Posthumus-van der Goot and Claire Posthumus in 1950. The occasion for this painting was the 70th birthday of their respectively husband and father, professor N.W. Posthumus.

Willemijn Posthumus-van der Goot (1897-1989), the first female doctor in economics in the Netherlands was one of the founders of the International Archives for the Women’s Movement in 1935. She was secretary of the board from 1935 until 1946 and later became president until 1954. Her daughter Claire worked at the IAV as a librarian from 1974 till 1998. The painting was bought in 1990 by the IIAV (now Atria).

Anna Overduin (1877-1937) was a graduated medical doctor. She introduced the remedial therapy called Mensendieck in the Netherlands. In 1913, she married Charles Jacobs, a nephew of Aletta Jacobs. Overduin was also a so-called ‘Sor’, according to this badge. The Soroptimist movement was founded in the United States in 1921. The name Soroptimist was coined from the […]