The famous medical doctor Aletta Jacobs was not the only female Jacobs who paved the way for other women. Her older sister Charlotte (1847-1916) became a pharmacist. In 1877, she started to study pharmacy, initially in Groningen and later in Amsterdam, where she graduated in 1881. 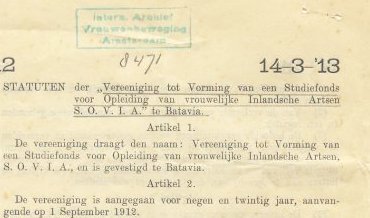 A couple of years later, in March 1884, Charlotte Jacobs left for the Dutch East-Indies. Up until that moment, she’d had a steady job as second pharmacist in a hospital pharmacy in Utrecht. Another six years later, she took a daring and admirable step. In Batavia she opened her own pharmacy called De Nederlandsche Apotheek Charlotte Jacobs (Dutch Pharmacy Charlotte Jacobs), of which she would be managing director for almost 25 years, until the end of 1912. She was the first – and for a long time the only –  female pharmacist in the Dutch East-Indies. As a matter of principle, she always hired female assistants.In the Netherlands, she advertised vacancies in the Pharmaceutisch Weekblad (pharmaceutical magazine) and applicants were asked to address their letters to her sister Aletta.