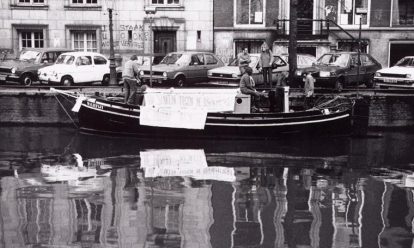 On March 30th 1981, the day before the bill on abortion would be addressed by the Upper Chamber, women in the Netherlands went on strike. They laid down their paid and unpaid work that day in order to protest. The strike was against a number of issues, such as the deteriorating position of women, unemployment which affected women the most, the breadwinner principle which undermined the economic independence of women, the right of parental access and sexual violence against women. But they mainly demonstrated against the abortion law which had just been accepted by the Lower House which took away women’s right to decide about their own body.

Staff, volunteers and board members of the International Archives for the Women’s Movement also participated. They gathered in the morning of March 30th 1981 in front of the building at Herengracht 264-266. With the boat of a friend they sailed through the canals with banners, crying and hooting, encouraging all women to participate. Each house with a participant had a sheet hanging from its window. The banners said ‘we strike against the abortion law, International Archives for the Women’s Movement’ and ‘Women decide, legalize abortion’.