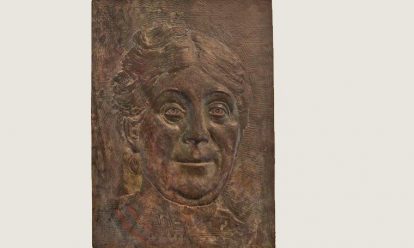 This beautiful bronze relief of the head of Wilhelmina Drucker (1847-1925) was made by the famous artist and resistance hero Gerrit van der Veen in 1939. Drucker was one of the co-founders of the Vrouwen Vereeniging (Women’s society) in 1889, an organization that was the motor behind many initiatives and societies. One of the most important societies originating from this was the Vereeniging voor Vrouwenkiesrecht (Society for Women’s Suffrage), founded in 1894.

Drucker also established, together with Theodore (Dora) Haver, the magazine Evolutie (Evolution) in 1893.
The last number of this magazine appeared in February 1926 and is now fully available online on our website.