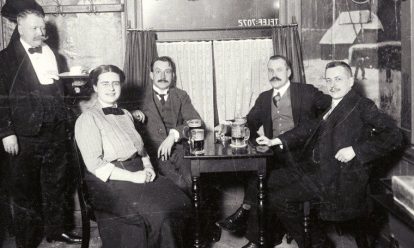 Johanna Westerdijk (1883-1961) was the first female professor in the Netherlands. This picture, from approximately 1912 in café Eik and Linde in Amsterdam, shows her with her friends from her student years.

After her biology study, in 1906, she became the director of the Phytopathologic Laboratory Willie Commelin Scholten in Amsterdam that had been set up some ten years earlier. In 1913, Johanna Westerdijk left to the then Dutch East-Indies to study diseases of tropical plants. She also made study tours to Asia and America. When she returned to the Netherlands, in 1917, she was appointed extraordinary professor in diseases of plants. In 1930, she also got a chair in Amsterdam.

She was an important source of inspiration for female students in biology.
Her slogan was ‘Labour and celebrations make up sound minds’.