The United Nations is a truly global system. No wonder it is a wordy system: many words are required to bridge the all too many gaps that divide countries. At the UN Head quarter in New York it strikes time and again how many nationalities, cultures and languages literally come together. Babylon at is best. For a moment increasing nationalism and populist protectionist seem to be at a distance.

The UN Commission on the Status of Women is no exception when it comes to being wordy. The theme of the 2019 Annual Meeting (March 11-22) is not exactly a one liner. “Social protection systems, access to public services and sustainable infrastructure for gender equality and the empowerment of women and girls.” It takes a a while to wrap one’s mind around it. Or maybe ‘under it’ is more appropriate. This umbrella-theme covers many necessities to bascially survive. Atria colleague Lisanne Post did an excellent job in her blog bringing the theme of CSW63 down to earth, pointing to the various things we in the Northern/Western hemisphere are fortunate enough to take for granted like, for example, electricity, clean water, safe public transportation system, health care, schools, pension systems, social security.

This is certainly not to say that gender equality is a done deal in the North. The presence of over 9000 (mostly) women from hundreds of NGOs worldwide, illustrates that the women’s movements is alive and a lot needs to be done. Women from across the globe are willing to travel to to New York, to head for social and political change. It makes CSW that unique place to meet with colleagues, friends, join new networks and plan more action.

The opening speech of Secretary General Guterres contained several bold statements on gender politics. Not only did he present himself again as feminist. He also framed the struggle for gender equality in a wider political context of a backlash. He explicitly acknowledged a decline in the protection and realization of women’s rights as directly related to increasing conservative developments. Against the backdrop of “a volatile global economy, rising conflict and instability, rapid population ageing, shrinking democratic spaces” he voiced profound concerns about the push-back on women’s rights. In his meeting on Wednesday with NGO representatives, he called on women to resist and push back. “Power is not given, it is taken.”

He echoed UN General Assembly President María Fernanda Espinosa who spoke of a a “serious regression” in the political power of women across the world in recent years. Earlier estimates indicated that it would take 30 years to close the gender gap, but now, she told the CSW Commission, if current trends continue, gender parity will not be reached for “107 years”.

It is not surprising that another bold term is more often heard at this years’ CSW: the call for “gender transformative” policies. Mary Robinson – former president of Ireland and former UN High Commissioner on Human Rights and member of one of the high-level CSW- panels – expressed her disappointment about the slow pace of change towards gender equality in no uncertain terms.

“Gender responsiveness is insufficient. We need to bring that to a higher gain. We need to be truly gender transformative. Make sure to address underlying structural patterns that feed into gender inequality. Like when we offer support to victims of violence, the toxic masculinity underlying the behavior needs to be addressed.”

The need to address underlying structural dynamics was also prominently voiced in the opening statement for the General Assembly of Dutch Minister Van Engelshoven, jointly delivered with the MP of Aruba, Ms. Wevers- Croes. They passionately pleaded for embracing diversity and acknowlediging the intersectionalities of disadvantages that women of different class, age, religion, ethnicities, sexual orientation face. Stating that gender inequality has lasted for too long, her conclusion was unequivocal: “Let’s close the gender gap all together.” The Minister emphasized her long standing commitment to get more women in leadership positions. 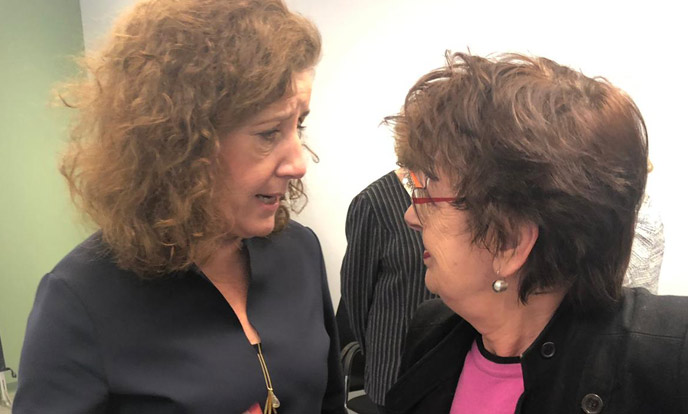 Mary Robinson provided at her panel meeting the inspiration to make that happen. “We need a moonshot approach. Imagine the impossible and make it possible. Like when John F. Kennedy said: ‘we need a man on the moon shortly’. Despite the disbelief, that man stood on the moon within a decade. We face a hugely urgent problem. Put a stake in the ground and make change happen! 2030 is only 11 years from now to realize sustainabality: push back climate change, increase gender equality.”

A call to action

Another news message created quite a stir on Thursday evening, just before posting this blog. The day after the Iranian women’s rights lawyer Nasrin Sotoudeh has been sentenced to 38 years imprisonment and 148 lashes for legal support to women who protested against the hijab, an expert from Iran was appointed on March 13 as member of the Working Group on the Communications on the Status of Women. An ultimate clash between noble words and naked facts. Between high brow principles and politics on the ground.

It seems that the protection of women’s rights can be sacrificed to political maneuvering within CSW. This is a wake up call we had not expected. Mr. Guterres has a challenge close to home to push back on.

Sometimes it happens to you. What you think will be just another day turns out to be an incredible day. One hard to forget because the people you met made a lasting impression.