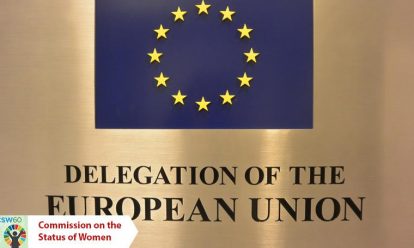 The UN can be a bit of a closed fort. Especially now that the negotiations are in full swing and taking up all of the time and attention of the people present here, it takes a while for news from the outside world to get through the thick cement walls of the UN Headquarters. The recent horrible events in Brussels have, however, finally reached the CSW. Given the time difference, it was terrible news to wake up to. Today I started my day with a morning briefing at the Permanent Mission of the EU to the UN. Apart from sharing updates on the Union’s position and input in the negotiations, the meeting was also used to briefly reflect on the attacks, which for the European External Action Service staff obviously hit close to home, having direct colleagues stationed in the European capital.

As in many places across the world, the attacks fanned the flames of populist politicians here in the US, with the upcoming presidential elections only amplifying this. Donald Trump was quick to link the attacks to Muslim refugees and migrants from the Middle East who have flooded into Europe as a result of Syria’s civil war and turmoil in the region, while Ted Cruz called for “patrolling and securing Muslim neighbourhoods.” It is with this in mind, that I attended a side event on women and islamophobia.

A sense of belonging

The more conflict in the world, the more xenophobia thrives.  The Council of American Islamic Relations, whose mission is to safeguard civil rights of the Muslim community in the US, sees a clear trend. A dangerous trend, they conclude. It constitutes a lack of sense of belonging, especially among young Muslims, which will eventually make them question: is there something inherently wrong about being Muslim? One of the panellists recalls: “… even before 9/11 in my youth in Indiana, I constantly had to hear how barabaric Muslim culture was and that I had to be afraid to go home because all Muslim fathers beat their wives and daughters.” Such remarks aimed at Muslims, according to statistics, lead to i.a. mental disorders. And if Islamic youngsters start seeking that sense of belonging in the wrong places, they become easy targets for radicalisation.

Women as Ambassadors of Islam

This story is as much true for the West as it is for other parts of the world, where, as I learnt today, it is also often Muslims that are targeted by discriminatory practices. In India, for example, Muslims belong to the lowest possible caste of untouchables and the poorest part of the population. Muslim women are specifically singled out as victims of rape.  Are women in general more targeted by islamophobia? The panellists were divided on this. They might be more identifiable as a Muslim, in case they choose to wear a headscarf. They will thus think twice about doing this to a job interview for instance. On the upside, they are also more identifiable as ambassadors of Islam. One of the speakers noted: “We have the ability and responsiblity to attack the stereotypes that people have about Muslims.”

Stereotypes that can only be eliminated if misogynistic acts implemented in the name of Islam, are eradicated. This brings me back to yesterday’s blog on harmful practices. The second side event of the day explored the role of women themselves to fight against practices executed under the false pretence of Islam (such as female genital mutilation, mandatory veiling and stoning). Uplifting stories come from Iran where women are taking selfies without headscarfs in protest against the moral police there and women in Morocco and Algeria being trained to become religious leaders. In the meantime, language on harmful practices are still to be discussed. They will surely be saved for D-Day tomorrow.

I attended the opening of the commission in the General Assembly Hall, could not make it to some events due to huge crowds and tight security and got inspired by African female internet entrepreneurs.