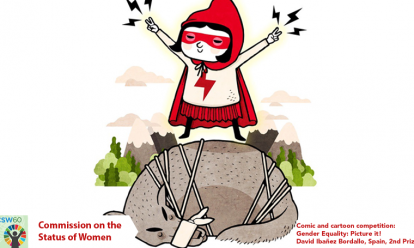 The opening session of the commission was held, as usual, in the General Assembly Room in the main building of the United Nations. The public tribunes of that Hall were so packed they had opened a so-called overflow room. Big screens allowed us, who were not there in time, to follow the proceedings. Of course director Renée Römkens of Atria and myself were present because the Dutch Minister of Education, Culture and Science Bussemaker was to address the general assembly in the Dutch capacity of president of the European Union. She underlined the EU commitment on the right of each individual to decide for themselves in matters related to their sexuality and their sexual and reproductive health. A strong statement, backed by 27 other member states of the United Nations. A statement much needed because the gains on this issue are under much debate in the international arena in these days.

UN-Women executive director Phumzile Mlambo honored in her address human rights defender and environmental activist Berta Cáceres from Honduras who was killed just last week. Cáceres was murdered when unidentified gunmen stormed the house she was staying in. She was a well-known critic of the right wing regime that came to power after a coup d’etat in 2009. She constantly received death threats and was detained by the police several times over the last years. But every time she managed to stay alive. Until last week.  I was sorry to learn that the Dutch development bank FMO funded her opponents, the company that is building a dam on sacred land of her people. A dam she opposed. Later this week her daughter will be present at an event and will talk about the fight her mother fought. I hope to be present at that event.

Later that afternoon I walked through the pouring rain to the Netherlands Club, just off 5th Avenue. Typical Dutch weather so to say and very appropriate to attend an event focussing on water, water management and the role of women and girls. In so many countries it is a women’s job to fetch the water. And water is, even though it is hard to imagine at days like this in New York, scarce in many parts of the world. Impressive was the presentation given by the female mayor of Hoboken, New Jersey. She discussed the challenges that city faced and faces in the aftermath of hurricane Sandy in 2013. She made her ambitions for the plans her city had developed to deal with these extreme situations quite clear when she said: ‘’My job is to do what I think is right for my city and not what I think I need to do to get re-elected. ’’

I rounded up this first, full day at CSW with a reception at the mission of European Union which was hosted by the Dutch presidency. This reception marked also the official opening of the cartoon exhibition ‘Gender Equality: Picture it’. European artists, in the age of 18 to 28, were invited to become champions for gender equality by illustrating their understanding on the subject by cartoons and comics. And although the winner of this contest was much praised I like the runner up best. To conclude this blog I would like to cite this artist, Spanish born David Ibáῆez Bordallo, who says about his cartoon: ‘’Stop telling stories, you are superpowerful!”.

From March 14 till 24 2016 the 60th UN-Commission on the Status of Women (CSW) will take place in New York. Atria keeps you informed on the CSW via facebook, twitter and linkedin, and with daily blogs. Today a blog on the opening session: a historical day.

Antia Wiersma. She was manager Collections, Research and Advice as well as deputy director of Atria until 1 October 2017.

However much support Minister Ploumen has managed to gather for her SheDecides fund, it has also generated some fierce opposition with a strong voice here at the UN.

The recent horrible events in Brussels have finally reached the CSW. Given the time difference, it was terrible news to wake up to.