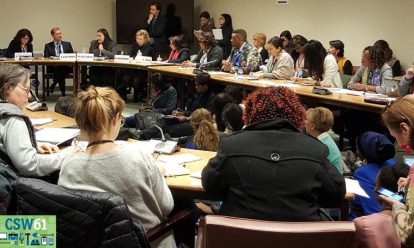 Women’s economic empowerment in the changing world of work is the  theme of the 61st annual meeting of the UN Commission on the Status of Women in New York.  A theme and concern that is urgent if we want to realize women’s rights, as has been emphasized in Dutch gender equality policies from the very beginning. Without women’s economic and financial independence women will remain a vulnerable  group that will be it first when crises hit. We can see that on a social-economic level, but also on at the personal level (a quarter of the Dutch women divorcing drop substantially in income, largely  because of their financial dependence on their ex-partner). Without women’s economic empowerment there can be no gender equality. All this that touches upon complex issues that go beyond work as such. Not only the right to work and the rights of women at work.  But also on the underlying conditions that enable of hinder women’s work, like the redistribution of care work, work-life balance, gender stereotyping  in regard to work and education, and last but not least: gender based violence – GBV – against women.

In the recent report of the UN Secretary general on women’s economic empowerment GBV gets therefore prominent attention. Attending CSW61 with colleague Antia Wiersma (see her blogs/vlogs on Atria’s website for daily accounts of CSW61) we divided our work, with me focusing on the intersection of  work and GBV.

And there is every reason to have a closer look at  this intersection. Take for example the costs of GBV. In a  2016 report of the World Bank, the annual cost of  GBV against women to the global economy are estimated to be $ 12 trillion. A figure that becomes almost abstract. Too high to count. And the enormity of the problem is part of the challenge of  the goals of the CSW meeting: it has to produce recommendations that are globally and nationally relevant and meaningful. Yet the huge global economic differences make precisely that a challenge. One needs to break global issues down to regional and national levels in order to address issues meaningfully.

Take for example sexual harassment at work – something that takes epidemic proportions in Europe according to the latest FRA-survey.  Although about two-third of the world’s countries has legal provision against sexual harassment, a deep gap remains between law on paper and  its implementation in practice. There is a lot to gain – also economically – in awareness raising among employers and their organizations to on how to effectively take responsibility to support women who experienced GBV and to break the pattern of abuse they are often caught in. An issue that certainly need more attention in the Netherlands form trade unions as well as from employers.

After three days attending many different side events that focus on GBV and work, I’m impressed by the enormous determination globally to keep working toward solutions, and to get beyond the analysis of the problem. All of the events are packed with attendants, often women and men trying to find spaces to sit on the floor.

The work in the field of GBV and gender equality is crucially leaning on the work of the many women’s NGOs across the world, many of which are present in New York. Research has shown that countries that have made progress in addressing GBV are those with a strong feminist NGO-network. And many governments across the world, with Australia and Canada, USA and several EU Member States as the “early adaptors” to the women’s movement, fully acknowledge this. They were able to make made substantial progress in setting up policy and legal measures to protect women through collaboration with women’s NGOs. Yet there is also a regularly expressed need in the various panels to reach more coherence. There is the strong call for the 4P-approach: prevention, protection, prosecution and integrated policies need to go hand in hand. The  Council of Europe Istanbul Convention (2011, on prevention  of violence against women and domestic violence) is subject of debate in many panels. It is the most recent regional (European) international legal mechanism example that could take the development and implementation of  legal mechanisms to effectively protect women further. Let’s hope that on the level of the EU this call is heard as well.

Mary Marinaki (principle EU Advisor on Gender) underlines that the EU takes GBV serious, yet admits that the EU Guidelines – non-binding unfortunately – to prevent Violence against women ‘need to be dusted off’. Let’s hope the CSW61 will inspire the EU in this respect. I could not agree more with her reference to  the fragility of progress and her reference in that respect to Simone de Beauvoir’s work. “Let’s never forget  that we cannot take women’s rights for granted.”

For the next two weeks, the United Nations (UN) will be focusing on women and girls at the sixty-first Commission on the Status of Women (CSW61) which is now underway at the UN in New York.

The UN can be a bit of a closed fort. Especially now that the negotiations are in full swing and taking up all of the time and attention of the people present here, it takes a while for news from the outside world to get through the thick cement walls of the UN Headquarters.