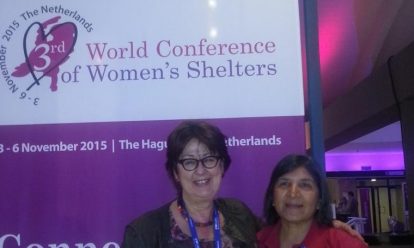 With over a 1000 participants coming from all continents, the 3rd World Conference on Women’s Shelters (WCWS, The Hague, November 3-6, 2015)  lived up to its name. It illustrates the ongoing globalizing and growing concern about how to protect women and girls against violence. The WCWS has grown from participants coming from about 50 countries at its first conference in 2008 (Edmonton, Canada), to 80 countries at the 2nd WCWS  in 2012 (Washington DC/USA) to 115 countries  represented in 2015 in The Hague.

The fact that conference organizers managed to secure funds to offer some financial support to women from disadvantaged countries and backgrounds, had worked out successfully. Key-note speakers as well as the experts offering over 160 workshops were coming from all regions in the world. In addressing a wide range of themes the program reflected the different needs and priorities that are inherent to such cultural, geo-political and social diversity. For example: a workshop on effective form of resistance of women under Muslim law (in this case Pakistan and Afghanistan)  revealed the profound challenges local women’s advocates face when engaging in a dialogue in a culturally sensitive manner in order to realize protection and respect for women’s rights. In the words of the Pakistani key note speaker “Our job goes beyond offering shelter. We need to influence our communities. Women also need the support of friends, not only professional help. Protection should not isolate women further. We need to offer protection and restore social dignity to women.”  This is a challenge women in Western cultures face as well. The Dutch Orange House – offering abused women and their children safe  housing in a way that connects them to their social environment  at the time time– is an innovative approach that positions the problem of domestic violence ‘in the open’, breaking the burden of hiding and isolation that a shelter may bring about.

No surprise then that the urgent need to engage men as active supporters and campaigners to end violence against women was a recurring theme at the conference. It was encouraging to see that an increasing number of male professionals participated. The smart use of technology to better protect women  (also by the police) was another popular topic.

With the Netherlands as host country, Dutch Minister Bussemaker, responsible for gender equality, as well as Queen Máxima of the Netherlands officially welcomed the participants. Both emphasized in their speeches the importance of education and economic independence for women as a way to empower women and enable them to leave abusive situations.  The Dutch Queen was very frank when she emphasized the gendered nature of domestic violence. Her citing (inter-)national prevalence data  that one in three women ever experience a form of physical or sexual abuse,  is historical in and of itself, given that in the Netherlands, the gendered nature of domestic violence is increasingly contested since a minority of men also suffer abuse from their spouse or relatives. Professor Rashida  Manjoo, the former UN Special Rapporteur (SR) on Violence Against Women (her mandate ended by mid 2015), eloquently  noted  in her key note speech that claiming that domestic violence is a gender neutral problem “ignores that violence against men is neither systemic nor pandemic the way violence against women is.”  The newly appointed SR, Dubravka  Simonovic  emphasized that she would  pay close attention to the way Governments implement the obligations they have under international human rights law to prevent violence against women and protect victims.

Queen Máxima, revealing her long-standing commitment to women’s development issues, emphasized that there can be no gender equality with this level of violence. She emphasized that the elimination of VAW is urgent and necessary to realize gender equality as one of the UN Sustainable Development Goal. Atria is pleased to support that agenda. In our work we will continue to clarify that gender based violence is both a consequence and one of the root causes of gender inequality.  At the meeting in March 2016 of the UN Commission on the Status of Women, Atria will work hard, in collaboration with other  women’s NGOs. to bring across that message (see also the blog of colleague Antia Wiersma).  Another opportunity to hopefully  make another small step forward in the long history of realizing women’s rights.