Summary:
The women’s peace movement and need for grassroots organising, peace education, nuclear weapons, nuclear power, global inequalities and poverty are the themes of the texts included in Fragen digitisation from this pamphlet. The demands and goals, methods and recent activities of the women’s peace movement are presented, both Finnish and international. Riitta Jallinoja’s article is a historical overview of the peace issue in the first Finnish women’s organisations in the end of the 19th and beginning of 20th century, including comments on the current situation. Anneli Pääkkönen writes about peace education analyzing current situations in homes, day care, school, the military and the consumer society. The manifesto of Women for peace as well as the texts by Hilkka Pietilä and Riitta Petäjistö are statements against nuclear weapons and nuclear power. In her other text Hilkka Pietilä discusses possible ways of disarmament. Lea Rantanen writes about feminist perspectives on peace work and feminist analysis of violence and militarism. Tatiana Sundgren’s poem (in Swedish, also a Finnish translation) deals with women’s grassroots organizing. Pictures are drawn by Kaarina Alsta. The writers share the view that work for peace needs to happen on grassroots level and that a radical change in mindsets and in social relations at large is needed. Peace is seen as “more than absence of war”. 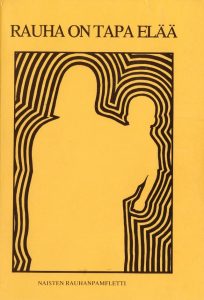 These expose Gretel Ammann’s approach to what she considered to be the essential questions concerning the feminist and lesbian struggle.

The book is a collection of lectures. It reflects the intellectual atmosphere of that time.

Women can liberate themselves only then when they are able to reflect their position in different contexts.

This manifesto summarizes in six points the message of the debate book “Manifestations. Everyday feminism in the 21st Century”.