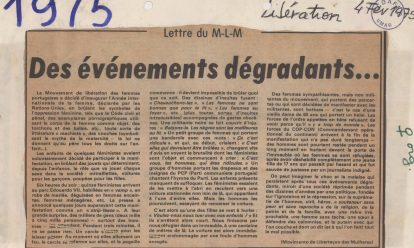 Summary:
“Des événements dégradants…” is the title of the article published in the Libération about the anti-feminist and “macho” attitudes shown by thousands of men at the first feminist manifestation that took place in Portugal, on April 13th 1975, in Lisbon, in the Park Eduardo VII, convened by the Women’s Liberation Movement, right after the implement of democracy on April, 25th 1974. The portuguese feminists wished to put in question some symbols of men’s oppression, pretending to burn those symbols such as fiancée’s wreaths, sexist toys, the civil code dating fom the late regime (the new civil code only appeared in 1978), pornographic magazines, etc. They were victims of male aggression and could not make this manifestation.

This article analyses the relationship between women’s empowerment and the formal and informal education given even from the early years.

A collection of powerful stories recording different lives of women and documenting their experiences defining roles of women and the lack of women’s empowerment.

Description of gender equality in Latvia before the collapse of Soviet system and during the first stage of transition to free market economy and real democracy.

The fundamental demand for complete and equal political participation of women and abolishment of all forms of violence and discrimination of women.