Summary:
The anthology is the first collection of lesbian theory, history of lesbian movement, culture, arts and politics in Slovenia (and abroad), covering the history of organized lesbian movement in Slovenia (and former Yugoslavia) in the period between 1984 and 1995. The book is comprised of texts published previously in lesbian and gay magazines, as well as unpublished records and interviews. Several photographs by established lesbian authors from Slovenia are also being published. In the first chapter editors are conceptualising lesbianism through different theoretical approaches. Following chapters consist of texts testifying about actions conducted by lesbian group LL; a reflection on relations within lesbian community; introduction of lesbian politics, culture and arts in Slovenia and abroad; presentation of the work of well known lesbian artists; interviews with profiled women artists and activists; thematization of lesbian fantasies, erotic productions and introduction of results of a survey on sexuality among Slovene lesbians and finally texts concerning the development of lesbian identity and its variety as far as coming out is concerned. In addition interviews with Slovenian lesbians and a yearbook depicting the history of the organized lesbian movement in Slovenia (projects, events, activities) round up the book. 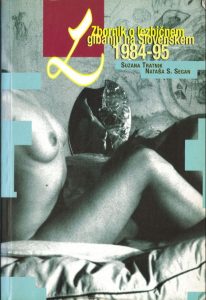 The introduction by editor Callus examines the main factors that have influenced social change with regards to women’s role in society and gives an overview of the chapters.

The 33 women’s stories presented in this volume reveal long-standing symbolic power structures of both “public” and “private” patriarchy and suggest the ways of their reproduction.

The book is among the first Bulgarian attempts to present the contemporary Bulgarian feminist writing. The authors have different approaches towards both “women’s issues” and feminism.